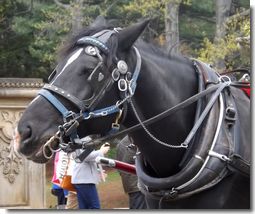 Taking up an issue central to the platform of Mayor Bill de Blasio, the New York City Council this week introduced legislation that would ban the horse and carriage business in New York City. It remains to be seen if it will be passed. It’s likely no visitor to Manhattan would be unfamiliar with the sight—especially in and around Central Park— of these iconic horse-drawn carriages.

If the legislation passes, it should be emphasized that only the horses will be banned from the city, and not the drivers. The drivers might be offered job “retraining,” or apply for green aka Boro Taxi medallions, or perhaps drive proposed novelty electric vehicles in place of the horse carriages. The horses will be, well, put out to pasture, ostensibly. 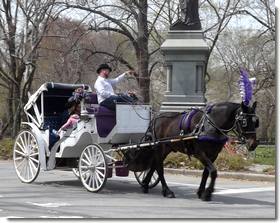 Polls show New Yorkers want the horses and carriages to stay, so why are politicians pursuing an unpopular thing? It goes back to the Democratic primary contest for the mayoral ticket, where de Blasio committed to ending the carriage horse business and gained the support of the vocal anti-carriage horse lobby. De Blasio, himself a dark horse in that contest, went on ultimately to win, as frontrunner Christine Quinn and other competitors stumbled (and relatively few actual voters even paid attention). Whether the mayor really believes in the issue or just doesn’t want to be seen to renege on a full-throated promise so blatantly, he is at any rate now pursuing it by way of legislation through the City Council. It has also been suggested that the issue is less horses than real estate: The stables that currently house the animals sit on land between 10th Avenue and the West Side Highway that has shot up in value and is coveted by developers.

However, whether naive or no, let’s put the money issue aside and just take the animal rights angle. For many years there have been those who’ve said the very fact of having horses pulling carriages in New York City is cruel and abusive. Partly as a result of this, the business is highly regulated (New York might be the regulation capital of the world). There are rules about how long the horses can work, and under what temperatures; there are mandatory rest days, vacations in the country, and regular inspections by veterinarians. And New York certainly is the media capital of the world: the very notion that the horses are being misused and abused when their work is all performed in public would seem to defy commonsense. But the sense being employed here is not particularly common; it needs to be noted that many of the animal rights activists who oppose the horse and carriage business also oppose any service to people by any animals whatsoever, equating it to human slavery.

Horses have been utilized in the role of “beasts of burden” for thousands of years. It seems likely to yours truly that rarely have they had as much attention and care as they have while pulling these carriages for tourists in New York City. 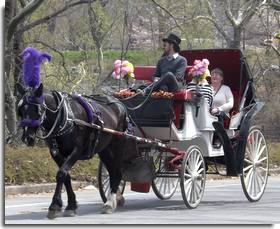 The anti-carriage horse folks eagerly highlight some accidents and incidents over the years. And accidents naturally have happened, garnering much publicity, far more indeed than is generally given to the many, many more accidents that humans suffer in New York every day. No one has yet advocated banning humans from New York City for this reason. (Though perhaps this bears more serious thinking. Imagine, with no people in the city, how much cleaner and quieter it would be. Imagine the reduction in costs related to sanitation, medical services, water supply, policing …! Of-course, tax receipts would take a big hit … but it seems to me someone at least ought to crunch the numbers: this may be something the mayor will want to add to his platform at the next election.)

On a few occasions over the years, horses have died while still in service. What’s not clear to me is whether—if the horses do not pull carriages—they will obtain the gift of eternal life. Do horses ever die in pastures? I confess that I’ve never seen it happen. Fully investigating the question will require a field trip, I guess.

But as much as people like seeing horses in pastures, I can’t help but speculate that if the need for horses to pull carriages in New York disappears, the result in the end will simply be fewer horses in the world.

I happen to be someone who is unlikely ever to pay the very high price to ride in one of these carriages, but I have to say that I do like seeing the horses. There is something calming about the sight of these beautiful, strong and placid animals clip-clopping through the park pulling their carriages. (The sight of the guys huffing and puffing on the pedicabs isn’t anywhere near as pleasing.) It is an antidote to the crazed hustle of the city. And, although I may not know much, I know this: If these horses are banned, then—whether it’s 10 years from now, or 20, or 30—there will surely come the day when people will be looking at photos of how New York City used to be, down through all the years of its existence, and will wonder why the horses and carriages suddenly disappeared. They will miss them terribly and envy the New Yorkers of bygone ages. There will be a campaign to bring them back, but it will not be so easy to restore this very small and special industry and craft once it has been wiped out. It is rather amazing that it has survived this long. In many places around the world, people would be going out of their way to protect such a precious and iconic treasure of their city, even if it didn’t make a profit; in New York, in 2014, we instead have to deal with an administration that is doing whatever it can to destroy it, despite the fact that it is thriving perfectly well on its own terms, without subsidies.

One compromise idea that pleases many people is to build stables for the horses in Central Park, so they don’t have to travel through the city streets from midtown to get there. The idea has not gained much traction as yet, probably because (1) space is obviously at a premium even in Central Park and no one wants to give it up and (2) in the end it wouldn’t satisfy the most radical activists because, you see, the horses would still be slaves.

As unlikely as it may be with the elected leaders we have chained ourselves to, here’s to hoping good sense prevails, for once. And failing that, a modicum of horse sense would do.