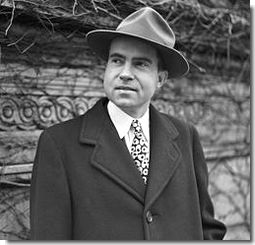 I like hats. Proper men’s hats, that is. It’s an affection that has developed in recent years, after belatedly realizing their utilitarian value and coming to understand that they also provide a relatively inexpensive and fun way of bettering one’s look and mood. When one begins wearing hats, it’s a natural thing to wonder why they ceased being ubiquitous in America, as they appear to have been based on photographs taken wherever men are present during the first half of the twentieth century. No man seemed to ever be without a fedora or other brimmed hat, at least when outdoors. Conventional wisdom has an answer to this—whether fully true or not—and it is that when John F. Kennedy stood hatless at his inauguration in 1961 the image of him doing so changed fashion on a dime, and men’s hats were transformed from a required item into a niche category. And then there came so many cheap baseball caps … and civilization duly collapsed.

This got me thinking: if Richard M. Nixon had been the winner of the 1960 presidential contest, would men’s hats have remained in fashion? On consideration, I don’t think so, because I don’t entirely buy the idea that JFK alone altered that fashion; I think it was bound to take place, and he merely hurried it and provided a prominent symbol. Yet, this train of thought leads to other speculations. The 1960 presidential election was one of the most closely-contested in American history. John F. Kennedy ultimately beat his opponent with only 0.1% of the vote. It was believed by many then that dead voter shenanigans in Richard Daley’s Chicago and similar fraud in Texas swung the election for Kennedy. Nixon chose not to be the first presidential contender in history to dispute an election, whether out of a genuine desire to avoid division or because he didn’t believe he would prevail. And John F. Kennedy was hatlessly sworn in on January 20th, 1961. His was a transformational presidency, though arguably more due to the hinges of history that would turn as a result as opposed to personal accomplishments in office.

What might the 1960s and the succeeding history of America have been like had the election gone the other way, and Richard M. Nixon was sworn in (hatted) instead? It can only be a speculative game, but it’s fascinating because the differences might be so enormous.

On the most elementary basis, it is certain that John F. Kennedy would not have been assassinated in Dallas in November of 1963. There is naturally no reason to think he would have ever been assassinated at all. Losing the presidential run, perhaps he would have remained for his career in the U.S. Senate. Or, ambitious as he was, maybe he would have tried for governor of Massachusetts, and/or tried another presidential run. Nixon, after all, ultimately ran again and won in 1968. But then a lot had changed at that stage in America.

Without a JFK presidency and the succeeding presidency of Lyndon Baines Johnson, would there have been a Vietnam War? That is, would America have gotten so deeply enmeshed in it and lost fifty thousand lives, and gone through all of the associated individual and national misery and trauma? This is arguably the biggest hinge of history to develop out of JFK’s presidency, and of-course it’s not possible to know what Nixon would have done, but the mere fact that there is a question is tantalizing enough. He was very much a pragmatist and driven by self-interest, and he may well not have chosen to gamble on deep involvement in a war in Southeast Asia. At any rate, being a different person, we at least know that he would not have pursued the policy in exactly the same way, and if he had led the country to war, he would not have prosecuted it in the same fashion. An America without the particular Vietnam War experience that was would be a different America with a different national psyche.

Along the same lines of national trauma, without a JFK assassination, how goes the two other great assassinations of the 1960s, namely Martin Luther King, Jr. and Robert F. Kennedy? Again, one cannot know, but one can know that it’s effectively impossible to imagine the same sequence of events occurring. A Nixon presidency would have been an altogether different milieu. And if all of these assassinations had not taken place, and there was no comparable Vietnam War, that deep sense of national darkness and widespread sense of betrayal by sinister conspiratorial and controlling forces may never have settled on the nation’s soul. In some ways it may have turned out to be a much calmer decade, and one with a very different resonance now.

And no Watergate scandal and Nixon resignation in 1974! But would Nixon’s character flaws have led to his undoing in the 1960s anyway? It’s certainly possible, but again, with so many different circumstances in a different America, it cannot be believed with any certainty. He may have gotten away with acting just as he did later. Or he may have acted differently in a very different national atmosphere.

What then of the progress in the 1960s? What of civil rights for African-Americans? On this the timing and exact nature of the change would have been different, but movement at the federal level had started in Eisenhower’s presidency (of which Nixon was a part) and there’s surely no question but that advocates for black civil rights would not have gone all quiet and meek with Nixon in the White House. It was an idea whose time had very much come, and I don’t believe it would have been put off much longer. As for Johnson’s Great Society, it would obviously not have gone forward in a similar way without him, but on the other hand Nixon proved himself to be quite liberal on domestic economic policies when he did take the reins, and it’s not hard to believe he would have gone along with liberals in Congress to pass aspects of the same agenda.

What about the moon? On this, I think, Nixon would lose twice. As it is, Kennedy initiated and inspired NASA’s project to land a man on the moon, but Nixon actually got to enjoy it when he eventually became president in 1969. Nixon seems unlikely to have reached for the moon in the same way JFK did, and wouldn’t then have gotten to enjoy the achievement as president either.

Looking at political history, if Nixon had won in 1960 then there would have been no Goldwater run in 1964. Further down the line, does that mean no Reagan in 1980? Politics is a mess of interconnections, and there’s no sorting it out. But the full degree to which things would likely have been different is quite remarkable to reflect upon.

Overall, it would seem I’m on the side of saying that a Nixon win in 1960 would have been better for the country, but that’s not out of a desire to put down JFK, but rather just from the current vantage point on the trauma of that decade and the ability to easily imagine things going differently in different circumstances. Bad things of a very different nature could have happened as well. A similar Cuban missile crisis may have occurred, but this one ending without the deal that was made and with millions of fried citizens instead. There’s no special reason to think that, but changing the individual who sits in the Oval Office causes countless other hinges to swing differently, great ones and small ones. Perhaps America avoided unknown catastrophes from 1960 to 1968. But there is a tragic irony in John F. Kennedy’s winning of the presidency, after such great effort, machination, and cost, and the high hopes with which he rode into town, only to be followed by the series of national tragedies of which his assassination was only the first.

All that aside, on this November 22nd, it’s right to say “hats off” to JFK.