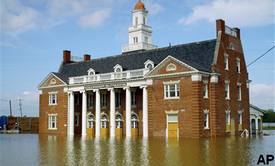 The mighty Mississippi is once again asserting the full girth of her floodplain, with brutal disregard for what human beings have toiled on and built since the last time that occurred. The AP story today states that the worst is yet to come.

In Vicksburg, Miss., the site of a pivotal Civil War battle, William Jefferson was already paddling slowly down his street in a small boat, past his house and around his church. The river is not expected to crest until May 19.

“Half my life is still in there,” he said, pointing to the small white house swamped by several feet of water. “I hate to see it when I go back in.”

Jefferson refuses to leave his hard-hit neighborhood, so he spends his days in the sweltering sun watching the water rise and sleeping in a camper at an intersection that’s likely to flood soon, too.

“If you don’t stay with your stuff, you won’t have it,” he said. “This is what I do every day. Just watch the water.”

We can pray that God looks over the souls who are afflicted by this flood of 2011, and carries them safely somehow above it.

When Bob Dylan wrote High Water (for Charlie Patton) in 2001 it was as much a commentary on human nature as it was a history lesson. In other words, typical Dylan. It seems to say: We have all these constructs — this veneer of civilization and order — but you find out what people are really about when it all breaks down, when the waters rise (literally or figuratively), and the only law is survival. Released, as it was, on September 11th, 2001, it had quite a resonance.

High water risin’, six inches ’bove my head
Coffins droppin’ in the street
Like balloons made out of lead
Water pourin’ into Vicksburg, don’t know what I’m goin’ to do
“Don’t reach out for me,” she said
“Can’t you see I’m drownin’ too?”
It’s rough out there
High water everywhere

The scorching version below is from some time in 2003, I think.