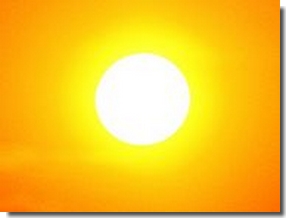 The story today is: Lack of Vitamin D in Children ‘Shocking’.

About 70 percent of U.S. children have low levels of vitamin D, which puts them at higher risk for bone and heart disease, researchers said today.

“We expected the prevalence of vitamin D deficiency would be high, but the magnitude of the problem nationwide was shocking,” said Dr. Juhi Kumar of Children’s Hospital at Montefiore Medical Center.

Cases of rickets, a bone disease in infants caused by low vitamin D levels, have also been increasing, other research shows.

The cause? Poor diet and lack of sunshine, the researchers conclude today in the online version of the journal Pediatrics.

And this doesn’t even get into the mounting evidence that insufficient levels of Vitamin D are associated with greatly increased risk of such major killers as colo-rectal cancer and breast cancer. (Previous post.)

And more recent research is even finding that Vitamin D can be a positive factor in the fight against Alzheimer’s disease.

UCLA scientists and colleagues from UC Riverside and the Human BioMolecular Research Institute have found that a form of vitamin D, together with a chemical found in turmeric spice called curcumin, may help stimulate the immune system to clear the brain of amyloid beta, which forms the plaques considered the hallmark of Alzheimer’s disease.

All doctors are dangerous, of-course, but the dermatologists have truly been killing us, and on a massive scale.

Update: And the never ending flow of new evidence showing the crucial nature of the sunshine vitamin continues as covered in this story from the New York Times: Can Vitamin D Improve Your Athletic Performance?

Although few studies have looked closely at the issue of Vitamin D and athletic performance, those that have are suggestive. A series of strange but evocative studies undertaken decades ago in Russia and Germany, for instance, hint that the Eastern Bloc nations may have depended in part on sunlamps and Vitamin D to produce their preternaturally well-muscled and world-beating athletes. In one of the studies, four Russian sprinters were doused with artificial, ultraviolet light. Another group wasn’t. Both trained identically for the 100-meter dash. The control group lowered their sprint times by 1.7 percent. The radiated runners, in comparison, improved by an impressive 7.4 percent.
Related

More recently, when researchers tested the vertical jumping ability of a small group of adolescent athletes, Larson-Meyer says, “they found that those who had the lowest levels of Vitamin D tended not to jump as high,” intimating that too little of the nutrient may impair muscle power. Low levels might also contribute to sports injuries, in part because Vitamin D is so important for bone and muscle health. In a Creighton University study of female naval recruits, stress fractures were reduced significantly after the women started taking supplements of Vitamin D and calcium.

And then there’s this, also from the Times: Vitamin D Shows Heart Benefits in Study:

In the study, researchers looked at tens of thousands of healthy adults 50 and older whose vitamin D levels had been measured during routine checkups. A majority, they found, were deficient in the vitamin. About two-thirds had less vitamin D in their bloodstreams than the authors considered healthy, and many were extremely deficient.