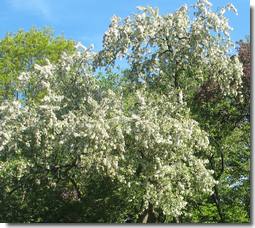 I came to allergies late in life. Through childhood and my twenties, I didn’t know what hay fever and such things were, other than that they were things that afflicted certain other people, and I sure was glad not be one of them: they seemed to be sad human beings, turned into miserable sniveling wretches by pleasant weather and the blooming beauty of nature. It was sometime in my early thirties that I became inexplicably taken with occasional strange bouts of sneezing that would not stop until they decided to no matter how much I blew my nose or yelled curses at the universe. But these were just annoying fits, I supposed. Then one beautiful spring day I was walking down the avenue, greatly admiring the trees on both sides in full bloom, the white and pink blossoms gorgeous and filled with delight in the radiant sunshine, when suddenly I began sneezing uncontrollably, and sniveling like a wretch, and then my eyes began watering, and then they started itching like nothing I’d ever experienced before, and the terrible truth abruptly dawned upon me: I’m allergic!

Since then it’s been a life of pills, and plenty of them, between April and June. Some people have it a lot worse—miserable wretches—and I’m sure glad I’m not one of them. But one thing that I have noticed in the past decade or so of being a sufferer of spring allergies is that virtually every year around this time there comes an announcement from the authorities-that-be, the ones who get quoted in the media, to the effect that this year the allergy season is going to be especially bad. It will start earlier, end later, be more intense, more merciless, even more inescapable than before. And each year it is for its own special and particular reason.

Take, as a completely random example, this year. “Polar Vortex Could Cause More Intense Allergy Season.” That’s typical of headlines currently sprouting everywhere. And naturally! What else would an extra-long, extra-cold winter do than fill the plants with a kind of delayed-action energy for pollen pumping? The doctors are duly quoted, “we’re already getting calls,” and the wretches are coming into their offices sneezing and crying. 2014 will surely be an unusually bad allergy season, and understandably so. 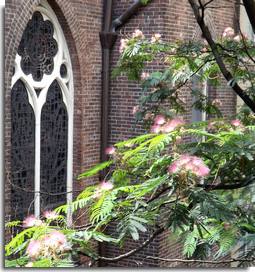 Kind of like 2012. Except different. Then, “the unusually warm spring weather in New York and other parts of the eastern United States has trees and other plants blooming much earlier than normal, which could mean a long and intense allergy season.”

But what about 2013? Fuggeddaboutit. That “could be the worst allergy season ever.” This was because of “a lot of precipitation during late winter and the warmer temperatures” of early spring. Makes perfect sense. And that story gets a mention in for global climate change which is making plants produce “three to five times more pollen.” It’s a wonder there are any of us allergy sufferers left alive to hear the latest reports on how the coming season will be so unusually bad yet again.

I’d go on, but I don’t think the internet goes back any further, and, besides, my fingers are tired, and the point seems more than adequately proven. There is obviously no meaning to words like “unusual” or “worst” when they are used each time an event occurs, yet this is how they are used, at least in the major media outlets of the United States, just about each and every March, as the spring allergy season approaches and begins. You can blame the doctors and scientists they are quoting, and I do, but on the other hand it is always possible to find some doctor or scientist to provide the appropriate alarming quote about something. The core abuse taking place is the aforementioned abuse of language: an abuse of the meaning and purpose of words. There was a story recently about how in the future robots will be writing most of the news we read, but it seems to be happening already. Insert the month of March, and receive articles on the unusually bad allergy season that is arriving. In August, there will stories on the unusual numbers of shark attacks which are occurring. Things go very smoothly in the journalism business when you only have to look at the calendar and pull out the same stories from last year to run once more with minor revisions.

The only unusual phenomenon, if you want to call it that, seems to be the presumed gullibility of the general public who are consuming this so-called news. But in the end maybe that’s not so unusual either.

We seem to have brains that are short on memory and on perspective and big on believing that the unprecedented is happening, all the time. It is, perhaps, a lazy way of keeping life interesting.

Now, excuse me: I’ve got to run down to the drug store and get those pills before they’re all snapped up.