In honor of the 50th anniversary of the release of Bob Dylan’s album The Times They Are A-Changin’ (and wilful perversity always being our first instinct), here’s a review of the short-lived Broadway musical of the same name, originally published on November 11th, 2006. 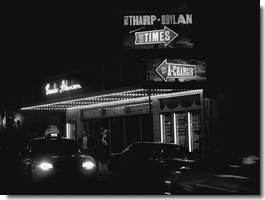 The Show Must Go On!

But it won’t go on. After being put down by all the major New York theater critics, the Twyla Tharp / Bob Dylan Broadway musical, The Times They Are A-Changin’, will close eight days from today (on November 19th).

Having now seen the show myself, I can honestly say that I believe this to be a crying shame. Both Mrs. C. (who is not quite as obsessive a Dylan aficionado) and I walked out of the theater shaking our heads, wondering, “What did the critics not get?”

The audience as a whole also seemed to have a great time, and the applause throughout and at the conclusion was appreciative and enthused — with at least some scattered standing O’s in the “final end.”

Now, I’m no theater expert, and I come at this show having previously seen mostly only classic revivals on Broadway, like Show Boat, Damn Yankees and Chicago. The finer points of Tharp’s dance artistry went way over my head, I have no doubt. Yet, it didn’t matter. I enjoyed the hell out of this show.

Dylan’s songs were, for me, exhilaratingly liberated from all of the historical baggage that they have been laden with. This, the great achievement of the show, was clearly and ironically one of the main sticking points for the critics. Many of them perceived the songs as less powerful, stripped of the associations that they clearly prefer to hold onto in their own minds (Vietnam, the sixties, and the same old malarkey). To this attendee, it was nothing short of glorious to hear these songs not as symbols or as anthems for any avaricious ideologies, but as the profound and revealing meditations on human nature that they are — and as just damned great songs to boot. The show was by turns humorous, poignant, frivolous and somber — and all of this, every twist and angle — came right out of the Bob Dylan songs themselves.

Though I would cede to no one in my respect for the breadth of Dylan’s work, even I was at times in something like shock at the variety of the tunes and at how well they stood up in this context. From Don’t Think Twice to Summer Days to Please Mrs. Henry (the latter a revelatory performance by the ensemble), it was astounding to contemplate that all of these different songs came from the same songwriter. It was a reminder of why we’re fans of this guy in the first place, and why his work generates so much attention from so many different angles. There’s no doubt that anyone coming to the show with little knowledge of Dylan’s songs would be taken aback at the quality and diversity of what this one songwriter has done over the years.

It’s easy to see why Dylan himself — who has spent decades now probing different angles of his own songs in live performances — would say: “It’s the best presentation of my songs I have ever seen or heard on any stage.” It does so right by the songs that it is hard to believe that Dylan himself had no part in the basic concept — but that’s what we’re told. In that case, Twyla Tharp truly got startlingly close to the heart of Dylan’s body of work, to the thread that runs through it, and put it on the stage without the distractions that surround his recorded albums (which are too often seen as “of their time” to one degree or another by the usual suspects).

Aside from pining for those very distractions that Tharp dispensed with, the other of the critics’ main sticking points concerned the plot of the musical. It was too vague or too inconclusive for most of them. Again, I don’t get what they didn’t get. Firstly, we are told (and it is obvious) that the setting is a “dreamscape.” The plot is not literal in the sense of very specific things happening which lead to other specific things which eventually lead to a neatly tied up conclusion. What we’re seeing on stage are the usually hidden recesses of human nature, expressed by the tumbling and intense imagery of Dylan’s songs, playing themselves out and generating conflict. It is not a story where you meet the good guy, you meet the villain, and the villain does something bad and the good guy takes a fall but then ultimately pulls himself together and conquers the villain. There is no villain in The Times They Are A-Changin’. Captain Arab seems to be the villain at a glance, but has so many sympathetic moments and songs that it is impossible to regard him as one-dimensionally evil. He and the “hero” (his son Coyote) are clearly different sides to the same coin. Thom Sesma’s performance in the role of the Captain was the best of the show. Arab (the name from Dylan’s old song was made politically correct by changing it to Ahrab in the promotional material) looks like a glam rocker who’s gone to seed. In his aging attire and worn appearance, we’re led to guess that he once was a fun-loving and joyful guy. Now, the burdens of age, responsibility, stress and greed, seem to have caught up with him and coated him with bitterness. However, his son, Coyote, while appearing young and idealistic, is not without his own flaws: impetuosity and naïveté among them. The leading lady, Cleo, is a woman exploited by Arab, and a source of yearning and angst for his son. On the other hand, when Arab sings Simple Twist Of Fate at stage right while Cleo and Coyote court, we’re given to understand that he knows very well the sting of lost love.

So, while Captain Arab and Coyote confront eachother, and Coyote’s opposition to him ultimately plays into the hands of the clowns (literally) who do away with Arab, neither is totally good nor bad, and both are in a sense imprisoned in a difficult and dangerous world (which is also the sense of the world that is omnipresent in Dylan’s work).

Many of the critics found the resolution of the play unsatisfying, and it certainly isn’t neat in terms of all the loose ends being tied up and thrown away, but that’s one of the key themes of the show, surely: Times change, and go on a-changin’, and in that sense they never change. While old Captain Arab has been violently despatched to God knows where, Coyote, with some sense of guilt, ruminates through a few songs including Dignity, and so sheds some of his childlike nature. The circus is renamed for him, and now he has to wield authority over it. There’s no indication that he won’t end up as torn by the stresses of time as Captain Arab was — we’re not supposed to believe that “all’s well that ends well.” Coyote and then the ensemble sing a rousing Forever Young, but it’s only a poignant wish, and not a promise. One thing the play has made clear, I think, is that no one can stay forever young; not on this earth and not even in a dreamscape of this earth.

And so, to me, while the play is secular in any conventional sense (even the song I Believe In You is sung as a love duet by Coyote and Cleo), it leaves you, as does Dylan’s work generally, looking nowhere but to the eternal for any resolution. In the beginning, Captain Arab sings a wicked and hilarious Highway 61 Revisited, introducing the character of “God” as a bearded monster stalking the stage on stilts ( “God said to Abraham, ‘Kill me a son'”) and in the end the wish is: “May God bless and keep you always.” Beyond the cycle of life, beyond the conflicts of the young, the old, the authority figures and those beneath them, beyond lovers lost and gained, there is something else, something eternal, and that’s where the longing rightly resides.

If that’s an unsatisfying resolution for the critics, then they’ll just have to take it up with a higher authority.

* * *
Now, there’s certainly criticisms I could make of the show — things I would have done differently, if I happened to be a theatrical genius with ten million dollars to spend on the same musical — but there’s little point in making those criticisms now. The show is daring and energetic, and succeeds, in my view, far more often than it fails. There have to be any number of inferior shows that are playing on Broadway right now. Maybe this one would never have been a gargantuan commercial success, but it’s a shame it didn’t get a better critical reception and the chance to play for a substantial length of time. It’s unlikely, I would guess, that it will be resurrected in any form, so the remaining eight days of performances are apparently all that’s left.

I feel fortunate to have been in a position to see it, and able to grab a couple of souvenirs for posterity. The Brooks-Atkinson Theater bar gives away free plastic “sippy” cups with your ($10) drink, allowing you to take your beverage into the theater with you. They are decorated with the musical’s logos. Soon, I guess, those cups and some memories will be all that remains of Tharp and Dylan’s The Times They Are A-Changin’, and that is indeed a pity, as far as I’m concerned. 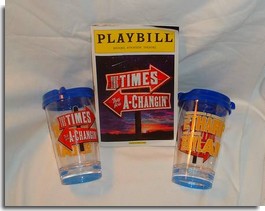