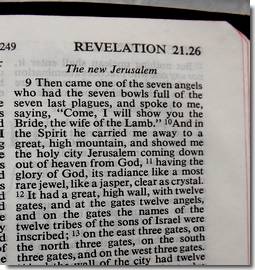 “Twelve Gates to the City” is a classic gospel number by the Reverend Gary Davis which Bob Dylan recently sang (in Toronto on July 15th, with guest musicians Jeff Tweedy of Wilco and and Jim James of My Morning Jacket). On YouTube you might just find someone’s amateur recording of that performance, and no doubt a version or two from the inestimable Rev. Davis himself (also purchasable here).

But, in advance of a brief reflection of my own on the song, here’s a different version, a live one from the very charming singer Eilen Jewell and her band.

(Their recording of that is available with other great gospel numbers on an album titled The Sacred Shakers,

a side project of Eilen Jewell and various musical compatriots.)

The song “Twelve Gates to the City” was inspired by chapter 21 of the Book of Revelation, where John’s vision of the New Jerusalem is described.

The walls of the city are said to be made of jasper, and the city itself is described as “pure gold, like clear glass.” As it happens, Bob Dylan once wrote a song of his own presumably inspired by the same passage of scripture, titled “City of Gold” (never officially released by him, but recorded by the Dixie Hummingbirds and featured on the soundtrack album for Dylan’s blockbuster movie, Masked & Anonymous).

Now, the length and width of the New Jerusalem are each specified in Revelation as being “12,000 stadia,” a measurement which in modern terms is equal to 1380 miles. That’s a heckuva big city. In fact, when you think about it, that is a city big enough for billions of people to live in. Naturally, the population density would be affected by zoning regulations, building codes and the like; on these matters, however, John the Revelator is unforthcoming.

I personally love the idea of heaven being a city. I know that some cherish the notion of an eternity of green valleys and quiet cottages, and I would certainly enjoy such environs on, say, a day-trip, but being a New Yorker by choice I find it difficult to imagine a satisfactory paradise without such things as 24-hour diners, a subway (a little cleaner and with air-conditioned platforms, mind you) and just a great conglomeration of everything within easy walking distance, and every kind of person imaginable. All of that minus the vice (as if that needs to be said).

Still, all of us poor sinners can surely take some comfort from this prophesied fact of the New Jerusalem’s gigantic size. The Book of Revelation contains some words of comfort within its pages, but it also often makes for pretty frightening reading if one is uncertain of one’s own righteousness. What the Reverend Gary Davis did, like many a good preacher, was extricate the hopefulness in these specific verses and lift it up and magnify it; in this case he did it not in a sermon, but in a song.

John the Revelator also prophesied of the New Jerusalem that those twelve gates “will never be shut by day—and there will be no night there.” What a fantastic line. (He might have been a very fine songwriter himself.) To say that the gates of the city will be open all day is a wonderful expression by itself of the freedom and openness of this city where God will dwell with man, but then to just add as if in an afterthought the fact that there will be no night is utterly beautiful and so very moving. It is a wonderfully indirect and poetic way of telling us that those twelve gates will be open all of the time, every day, every year, forever. God’s city, this New Jerusalem, will not be one built to confine any unwilling inhabitants, nor will it be one that ever needs to fear any attack, from anyone.

Oh, what a beautiful city.