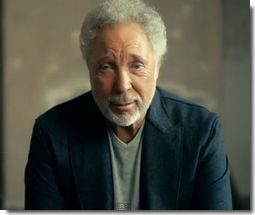 Scheduled for release on April 23rd in the U.S. (on Rounder Records) is a new album from Tom Jones, titled Spirit in the Room.

It was released on the other side of the pond last year. I confess I’ve only just become aware of it, and that was through my encountering on YouTube the video for Tom Jones’ rendition of Leonard Cohen’s great old tune “Tower of Song,” which is the first track on the album.

Yet, sung by Tom Jones, the magical and beautiful thing is that this couplet loses its irony, and becomes the key declaration of this new incarnation of “Tower of Song.” Tom Jones is not a songwriter, and he is not a poet of words on a page. Everything he’s achieved has in the end been by getting out there on stage, night after night, and singing the hell out of the songs of others, during good times and bad. He’s dedicated himself to it, and he’s been addicted to it, and—after all of these decades—he’s worked at it so hard and so well that he’s left virtually every contemporary in the dust, and earned levels of respect that no one back then would have imagined the singer of “What’s New, Pussycat?” would ever have acquired. Even if it should be that he has nothing else, it truly must be acknowledged that he does have a golden voice, and one that he has not hidden away, but has exercised every day of his life. With his singing of those lines, this becomes his song. His life has surely been lived in that Tower of Song, if anyone’s has. In a similar way to how many people believe “My Way” is Frank Sinatra’s song (actually I personally think it’s a horrible song that even Frank despised), “Tower of Song” really ought now to be Tom Jones’ theme and anthem, albeit that it is probably the most nuanced anthem anyone could imagine. (That only makes it better.)

Tom Jones is seventy-two years-old, going on seventy-three, as difficult as that is to type or to believe. This song fits him like a glove: it is precisely the moment to take stock of who and what he has been, how he has used his talent and spent his days on this earth. So, it is perfectly chosen and perfectly timed. And there’s one more thing that must be said. As with certain other singers from a seemingly-bygone-era, Tom Jones has often been enjoyed by many of us (let’s face it) in a campy and ironic sense. There’s all that clearly dubious material he has sung in the past, after all; there was all that sex-bomb stuff, all of those panties thrown on the stage. That’s showbiz, and nothing to be ashamed about; Tom Jones was trying to make it as a pure pop vocalist in a time highly unsympathetic to that profession, and it is hardly any criticism to say that he gave the customers what they wanted. Only that and the grace of God enabled him to survive and reach this point. What is this point? Well, although Tom Jones has recorded lots of genuinely terrific tunes before this, I think that it is with “Tower of Song” that he has utterly blown away all of that camp and irony stuff. It’s not there anymore. It’s been shot through the heart. Tom Jones is—purely, simply and unironically—a great singer.

Thinking about the path of Tom Jones’s career, it is pretty darned amazing and odd, is it not? But then, as Sister Rosetta Tharpe has assured us, there are “Strange Things Happen Every Day.”