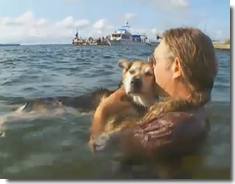 Last year, a photograph of a man named John cradling his aging dog while floating in Lake Superior went mega-viral. (It’s the photo at the top of their Facebook page.) That dog, a twenty-year old shepherd mix named Schoep, finally passed on yesterday. The story behind the photo, for those who missed it, is that due to Schoep’s arthritis, about the only place he could truly relax was in water, while floating. So his owner would take him to that lake as often as possible and just hold him in his arms and allow Schoep to relax and doze. He had gotten Schoep from a shelter as a puppy.

I guess that the photo with its context was so moving to so many people because of how it perfectly portrayed something so incredibly precious to us; that is, truly gratuitous kindness and love. At 18, 19 and 20 years old, a dog—especially one the size of Schoep—had already lived well beyond its normal expectancy. No one could fault the man John in the least for saying, “Well, he’s had a great life, he’s in pain now, and I just can’t realistically spend all this time taking care of him.” It would have been entirely normal and understandable to bring him to the vet to be put to sleep. There was no need to put so much time into easing Schoep’s arthritic pain and extending his life by yet a few more months. Schoep, being a helpless dog, would not complain about being brought to the vet for one final visit. No one would criticize his owner. Yet, his owner chose to show the helpless creature this gratuitous kindness, and a photo of just one of their moments together raced around the world and got the attention of millions and coaxed more than a few tears.

We know pure kindness when we see it and we know then how valuable it is. Yet so often in “real life,” so to speak, we can fail to remember how showing kindness—even or especially when it seems irrational—can ennoble and cheer us and get us all through dark times. Too often instead, if only naturally, we think first of the burdens we’re afraid of having to shoulder, and we presume from others also this aversion to taking on too much. It colors our decision-making and our judgment. It is not only old dogs who are helpless and in need of this kind of kindness, but people too, especially at the very end and very beginning of their lives. We look to avoid the burden and the inconvenience, and forget what might be gained from meeting it instead with generosity and kindness. And the society-at-large tends to reinforce us in our desire to just avoid the trouble.

But there you go. A photo of a man and his dog struck a chord with millions and perhaps served as a reminder that sometimes it’s the craziest lengths that we go to in our kindness and in our love which prove the most valuable and uplifting of all.