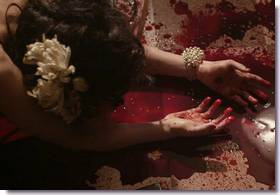 What can one say? Aside from that which seems so obvious; i.e., that this is exceedingly boring territory. Attacking Roman Catholic clergy for sexual sins and hypocrisy is hardly groundbreaking stuff in 2013. Is David Bowie feeling so oppressed that he just had to make this kind of statement? The Roman Catholic Church, and Christianity generally, is waning to such a degree in Bowie’s native Europe that this seems an egregious case of kicking someone when they’re down. However, I think that one will notice, when observing mobs, that kicking someone when they’re down is a kind of primal urge that many people feel helpless to resist.

Another very obvious observation is that it would take a certain amount of real courage to confront the genuine source of growing religious extremism and intolerance in Europe and indeed beyond. If David Bowie’s video had instead featured the prophet Mohammed beheading infidels, beating women, and whatnot, the headlines would be rather different right now, and Bowie would be dealing with a deluge of fatwas for his effort, and would have to spend the rest of his life waiting for an Islamic attacker to find and kill him. It’s so much less complicated to slur and mock the fading Christians.

I quite liked the first single from Bowie’s new album, namely “Where Are We Now?,” a suggestively-poignant little number, but this tune, “The Next Day,” seems very plodding and pedestrian to yours truly. Bowie succeeds best—when he succeeds—by employing a degree of mastery of musical genre, texture, and reference, crafting a pop record that tickles the mind and the heart and makes the toes tap at the same time. It doesn’t work so well when you see the joins, when the whole thing is predictable after the first bar, as it is here. Does the mean-spiritedness of the video affect my judgment of “The Next Day” in this respect? I really don’t think so, but, of-course, anything’s possible.

If Bowie is stuck unimaginatively in the past here, some of his critics are too. Bill Donahue of the Catholic League, always good for a quote, outdoes himself by declaring in his complaint that “the switch-hitting, bisexual, senior citizen from London has resurfaced…”. Facts and/or fantasies regarding David Bowie’s personal life are not what’s relevant here, and it’s highly unseemly to bash him in this way. When an artist produces an artistic work, that work ought to be judged on its own merits, or lack thereof. In this case, I don’t happen to think that there is much in the way of artfulness, depth or subtlety to “The Next Day,” and it’s difficult to understand why the 66-year-old artist known as David Bowie would find this kind of thing worth spending so much time on, considering how little of the stuff he has remaining to him. But then, human beings are bottomless conundrums; that’s why we love ’em, I guess.

After all that, I feel inclined to end on a more positive note. Embedded via YouTube below is Leonard Cohen—that incorrigible old coot—utterly unafraid, at the age of 78, to get down on his knees, in this live rendition of one of his greatest and newest songs, “Show Me the Place.”

Judge it on its merits.