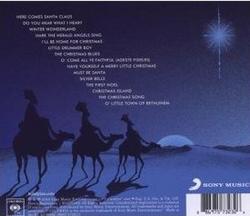 The concluding emphasis of the song (on thanking God) also reflects back, by the way, upon lines which we had already heard and will hear again when we replay the track. Earlier in the song, there is the line, Santa knows we’re all God’s children / And that makes everything right. There’s also, Hang your stockings and say your prayers / ’Cos Santa Claus comes tonight. Before, these lines went by fast and might not have seemed to signify much, but thanks to the emphasis on thanking God in Bob’s conclusion, their import is amplified. Suddenly it seems as if Here Comes Santa Claus is really a religious song masquerading as a song about the obese red-suited elf. Dylan’s arrangement and performance of the song has done nothing if not gently lift the mask.

Another line that may have seemed less significant before is that “follow the light,” as in Peace on Earth will come to all / If we just follow the light, which Dylan’s arrangement also repeats and emphasizes. A meaningless platitude? Well, light has a great deal of significance, and perhaps this song, and in particular Dylan’s version of it, is comprehending that.

If the light passed us by that time, however, the very next track makes sure we don’t miss it. On the almost-too-sweet evocation of the birth of Christ that is the song Do You Hear What I Hear, Dylan sings all of the lyrics as laid out in the song but manages to get across his emphasis in his performance. It is in the startling and dramatic way in which he sings the final word of the song, that word being light. The last verse of the song as written expresses the words of an earthly king (perhaps one of the Three Kings?) who announces “to the people everywhere”:

On Bob’s final repetition of that line, and specifically on the word light, he raises his voice and his pitch in a way that is altogether impossible to miss. (It is, in fact, a point at which many people — philistines, of-course! — would simply run from the room or take an ax to the speaker cables.) He is reaching for something he simply can’t achieve, judged by any normal standard; his voice breaks — it is either unseemly or very nearly so. The listener wonders: Doesn’t he know he didn’t make that? Doesn’t he know that he couldn’t make it? Why did he even attempt it?

But the word echoes in the listener’s head. It cannot but, after that vocal effort. The word is light.

He will bring us goodness and light

In an interview quite a few years ago, Bill Flanagan observed to Bob Dylan that someone who knows the Bible will hear Bob’s songs one way, and someone who doesn’t will hear them in a different way. These aren’t Dylan’s songs, but he’s the same Bob, and certainly he knows his Bible, and I do think that he knows what he’s doing with these words.

Light shows up in the very first words of God as given in the Bible. That’s in chapter one, verse three of the Book of Genesis. In context, the first four verses go like this (RSV):

In the beginning God created the heavens and the earth. The earth was without form and void, and darkness was upon the face of the deep; and the Spirit of God was moving over the face of the waters.

And God said, “Let there be light,” and there was light. And God saw that the light was good; and God separated the light from the darkness.

The first reported words of God are something of special importance, one would think. And light, as any physicist will tell you, is a big deal.

And for Christians, there are no more fundamental words in the New Testament to tell who Jesus Christ is than the opening verses of the Gospel of John, starting with “In the beginning was the Word.” From verse two:

He was in the beginning with God; all things were made through him, and without him was not anything that was made. In him was life, and the life was the light of men. The light shines in the darkness, and the darkness has not overcome it.

Repeatedly throughout the Bible, light is associated with God and with all that is good that comes from God. It would be beyond me to even begin a litany of such references, but here’s just one more from the Book of Daniel, chapter two, using the KJV here:

Daniel answered and said, Blessed be the name of God for ever and ever: for wisdom and might are his:

And he changeth the times and the seasons: he removeth kings, and setteth up kings: he giveth wisdom unto the wise, and knowledge to them that know understanding:

He revealeth the deep and secret things: he knoweth what is in the darkness, and the light dwelleth with him.

(Dylan fans might also recognize some of the words above from a song Bob sang on stage during those gospel years.)

With the references to light and its association with God which Bob Dylan emphasizes in his rendition of the first two songs, again the listener is receiving a suggestion, similar to the one given by the lines Let’s give thanks to the Lord above / ’Cos Santa Claus comes tonight. In this case we’re being reminded — at a minimum — that all light comes from God, and indeed all that is bright and cheerful and warm. And we do well to thank God for that light, and to follow that light.

And indeed, Christmas is full of light, as are the songs of Christmas.

Christmas eve will find me / Where the love light gleams

Hang a shining star / Upon the highest bough

Strings of streetlights / Even stoplights / Blink a bright red and green

Tiny little tots with their eyes all aglow …

I do believe that thanks to Dylan’s emphasis in the first two tracks of this album, the listener is invited to be conscious of the fact that all of these lights, both the grand and the subtle, reflect back upon and truly emanate from that first word of God.

In the final song of the album the light comes full circle, so to speak. That’s the song O Little Town of Bethlehem, and these lines:

In Dylan’s recent interview about this album, again it’s Bill Flanagan asking the questions, and he puts it to Bob that he sounds like “a true believer” when he sings those lines, The hopes and fears of all the years / Are met in thee tonight. Dylan responds simply, “Well, I am a true believer.” The simplicity of that statement hasn’t prevented elaborate parsing by some. Even simpler is the great and lovely “amen” with which Bob closes this song and the album. Hearing it, this listener receives a suggestion that the entire album might have been a prayer or a hymn of sorts. Certainly I’ve never heard a Christmas album on which all of these quite different kinds of Christmas songs live together so well, and seem to make so much sense in sequence. I do think it is the special achievement of Bob Dylan’s Christmas In the Heart

, and it is quite an achievement at that.

All of this is not to ignore other musical elements of the album, which I think some critics have underrated or dismissed too quickly. Aside from the freshness which Dylan’s very particular vocals bring to these old songs, the musicians are very far from sleep-walking through the process, bringing out the real strengths and dignities of even some of these old Tin Pan Alley type Christmas tunes, which sadly get performed so often with so little feeling. The production is both immaculate and witty.

And with all of that said, I’d have to be a Grinch or a Scrooge to give the album any other rating than the one below.

Available from Amazon.com: Christmas In the Heart

9 thoughts on “Follow the Light: The Heart in Bob Dylan’s Christmas”