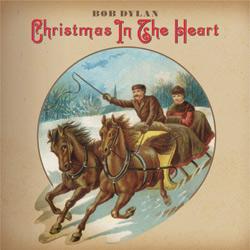 (Warning: Contains spoilers for those who still believe in Santa Claus)

struck me both strongly and delightfully upon the very first listen, and it continues to strike me that way after many further spins. However, rather than try to make a grand case here as to why others ought to like the album (I know that some people love it and some people feel quite otherwise) I’m just going to explore why it seems to work better for me personally than most Christmas albums. I do suspect that how I have inwardly responded to it is true for quite a few others as well, whether or not they have analyzed it for themselves in the same way I do here.

First, I feel I need to make some general observations regarding popular Christmas music, from the point of view of a Christian believer, and indeed on how Christmas is generally celebrated in the culture I call my own. Bluntly speaking, Christians have to sometimes wonder if it is more than merely coincidental that the name Santa is an anagram of Satan. The Devil himself, after all, could hardly have come up with more effective competition for the story of the birth of Jesus (the incarnation of God, according to Christian belief) than the story of Santa Claus, or “Father Christmas” as he’s usually referred to across the pond. A story of God’s love for humankind, so poignantly evoked by the gift of his son and that son’s humble birth in a stable, is shunted to the side in favor of a story that seems to be all about the acquisition of material things (i.e. toys and gifts) through the magical power of a fictional fat man in a red suit. We know how the myth grew out of the story of a Christian saint by the name of Nicholas, but the past hundred years of super-powered pop culture have certainly eliminated all vestiges of Christianity from the tale. Storybooks, cartoons, films, toy figures and countless costumed men in retail stores have provided a rich and constantly-expanding alternative narrative for Christmas. It is one that also seeks to co-opt elements at the heart of the Christian story of Christmas: concepts like goodwill to men, generosity, selflessness, kindness and miracles, yet all the while leaving God out entirely. In place of the Christian story of the miracle of the incarnation of that God we have, well, the miracle on 34th street. There is of-course plenty that’s good and sweet and uplifting about the Santa myth; in a way, however, that’s what’s so bad about it.

Then there’s also that rite of childhood when — sometime between 6 and 12 years of age, for most — you realize that there is no Santa Claus. It was only a myth that the grown-ups told you to make Christmas fun and magical. (Or was it just to amuse themselves?) Now, you get to play along for the benefit of the younger kids. Yet, if Santa Claus and all his many trappings amount to just a feel-good pack of lies, then what of that other story you were told alongside this one — the one about the baby in the manger and the shepherds and the three kings and so on — what of that? Is that feel-good story so much more credible?

This tension of the competing narratives of Christmas is felt, inevitably, in the songs of Christmas. There are on the one hand the hymns about Jesus and Bethlehem, and then there are the songs of Santa and his reindeer and his lists of the naughty and the nice. Treading the middle ground are secular songs of the season such as White Christmas and I’ll Be Home for Christmas. Yet every time that someone records an album mixing these various Christmas songs together, the implicit question for the listener is this: Which is it? Am I supposed to be happy because Santa Claus is coming to town, or because Christ is born in Bethlehem? Is it all about the chestnuts on the open fire, or does it matter more that God and sinners have been reconciled? Of-course you can just shrug it all off to get along, and that’s exactly what we do. And if you’re a musician like Frank Sinatra, you might make one side of your album (A Jolly Christmas

) the “secular” side and one the religious side, just to keep things nice and clean. Others have recorded Christmas albums that are exclusively religious or exclusively secular in nature.

The question I’m approaching here, however, is this: If you’re Bob Dylan, what do you do? What did he do?

The first time I heard Christmas In the Heart

from start to finish I thought to myself that it was the only time I’d heard an album of all kinds of Christmas songs like this where there seemed to be a unity of spirit throughout. There didn’t seem to be a tension between the lighter Santa songs and the holy hymns. Although distinct in nature, they seemed to be coexisting just fine, and even complementing one another. I didn’t immediately know why this was. I figured at first that it was just my innate enthusiasm for Bob Dylan himself that was blurring my perceptions, and making me enjoy everything in such good humor. But after repeated listening to the album as an album, from track 1 through track 15, I believe I have a better understanding of why this particular Christmas album has been working so especially well for me.

Dylan didn’t write any of the songs, of-course, and he doesn’t take any significant liberties with the lyrics. His creative latitude is therefore confined to his own performance of the songs (how he sings the words), to his choice of which lyrics he sings (some of these songs have quite a lot of verses which are not sung in every rendition), to his musical arrangements, and finally to the way in which he sequences the songs on the album.

All of these elements — performance, selected lyrics, arrangement and sequencing — are at play, I think, in the first track of the album. I would in fact argue that Here Comes Santa Claus is the crucial song. (I enjoyed writing that sentence — when else would you get the chance?) I believe that it sets the tone and the stage for the rest of the record, and that this is no accident at all.

I never gave much thought to this particular Christmas song before hearing Dylan’s version. If you put a nickel in me and asked me to play Here Comes Santa Claus, my mental jukebox would have coughed up the version by Bob B. Soxx and the Blue Jeans — one of Phil Spector’s Christmas classics

. That’s the one that had been embedded in my brain as the essential version, for whatever reason. The record includes those elements of childlike perspective and irresistibly over-the-top pop production that distinguish Spector’s greatest hits. I liked it and still do.

One thing I’d never have said, however, was that Here Comes Santa Claus was any kind of religious song. Yet, hearing Dylan’s rendition, I could not help but be struck and suprised by how it seemed to point the listener not only up the chimney towards the descending fat man but also quite firmly towards the sky above and the Man Himself, so to speak.

And when you listen to the track with this in mind it’s by no means rocket science to detect how Dylan does it, especially when compared to other versions. The Phil Spector version, for instance, does not even include the lines about how we should “follow the light” and give “thanks to the Lord above.” Bob B. Soxx and her Blue Jeans just ditched them, with Phil at the controls. Dylan’s version, by contrast, not only includes these lines, but repeats them, and indeed concludes the song with them. That sequence goes like this (with a lovely kind of call and response between Bob and the backing vocalists)::

Even Gene Autry’s original version, while of-course including these lines, does not repeat them and does not conclude with them, reverting instead to those reindeer, bells and stockings for the final refrain.

If we just follow the light: these are the words that seemed worth repeating to Bob; these and Let’s give thanks to the Lord above / ’Cos Santa Claus comes tonight. I do believe that the deliberate emphasis of this perspective, in the very first track, makes a real statement and offers the listener a special way of grasping all that follows. It’s an interesting concept, after all: “Let’s give thanks to God for Santa Claus.” Santa Claus, as mentioned, is a myth, and one which often seems to be crowding out the religious story of Christmas. What this line, however, is suggesting to us, I think, is that to the extent the story of Santa lifts hearts and brings smiles, it is a good thing, and, like all good things, we have reason to be thankful to the Lord above for it. Santa, for all his occasional flaws and those of his agents in Hollywood and beyond, came out of the spirit of Christmas, and at its best the story promotes kindness, generosity and love. These are all gifts from God and we do well to enjoy them while remembering their source and giving those appropriate thanks.

You might say that this is a lot to take from these two lines of the song, but I do believe that the repetition and slow emphasis of these lines in this performance is precisely inviting the listener to meditate on what it means to give thanks to God for Santa Claus.

And as goes Santa, so goes the rest of Christmas — the secular, the silly and the otherwise: the silver bells, those chestnuts, the sleigh bells, the snow, the sardonic Christmas blues of Sammy Cahn, and even the great big coconut tree on Christmas Island. All of these funny, warm-hearted and mixed-up things also provide their own reasons for being thankful to God, without whom, after all, none of this would be happening. Dylan’s special rendition of Here Comes Santa Claus has offered us the right spirit in which to enjoy all of Christmas, and all of Christmas’s songs. (Click for page two.)

9 thoughts on “Follow the Light: The Heart in Bob Dylan’s Christmas”