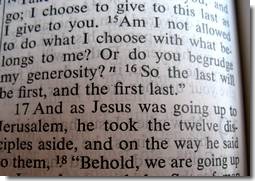 Based on the outline above, it looks like a pretty good case of zero tolerance for Christianity. The initial remark about the first being last and the last being first seems far more jocular in nature than proselytory, given the context. It happened to stimulate this student’s curiosity. If Walter Tutka had attributed the quote to Bob Dylan, and brought in a copy of “The Times They Are A-Changin'” (a song which does include that line) then there no doubt would have been no problem. The Bible is indeed a book of Jewish and Christian Scripture, but it is also literature, and quotes of that kind are at least as important to be familiar with as great quotes from Shakespeare. They are infused in our culture and themselves inspire more literature, poetry and music. Is the original source to be banned from being viewed or mentioned in schools? Well, I ask the question, but I know that it’s rather like asking whether we should consider maybe pushing the barn door closed after the horse has already run down the road and gotten hit by a truck.

Over a year ago, in a bit of original investigative reporting, yours truly illustrated in some detail how a public school in New York City utilizes Hindu and Buddhist terminology and concepts in a program designed to encourage good behavior over bad. The school continues to do so to this day. No one bats an eyelid. And as I indicated then, I don’t necessarily have a problem with what they’re doing, if it actually works. The problem is the double standard, and the zero tolerance and indeed outright hostility afforded to Christian words and concepts. By promoting and talking about all kinds of other ideas, but treating Christian ones as off-limits, the underlying message being communicated is that Christianity is toxic: whatever you do, don’t look for meaning there. The same First Amendment to the U.S. Constitution which says that “Congress shall make no law respecting an establishment of religion,” also prohibits the government from “prohibiting the free exercise thereof,” and also prohibits the government from “abridging the freedom of speech.” In many public schools across the nation the first part is taken to the most absurd extreme when it comes to Christianity, while the next two are tossed in the trash, again, when it comes to Christianity.

That’s the way it is. We’ve gotten used to it. Currently, there’s a lot of chatter going on in America about a particular problem which seems to be more pronounced in recent times than before; i.e. the problem of these diabolical mass killings, as in Newtown, Connecticut, and Aurora, Colorado, and Tuscon, Arizona, and so on. People are inclined to reach for a simple answer, but there does not seem to be any single solution. The only certain thing is that there will be more killings of this nature. I do think it could be said that there is at least one fundamental thing in common in all of these meaningless mass murders, and that is that they are committed by someone who has descended into an abyss of total nihilism. Of-course mental illness is involved, but there are different kinds in play, and different contexts. What the perpetrators have in common, almost by definition based on their behavior, is a belief that their own lives do not matter, and that the lives of others do not matter. In fact, they are actively embracing the very opposite—chaos and death—as being preferable to continued life.

I am not, however, working my way around to suggesting that reintroducing prayer to public schools would solve this problem. It wouldn’t. No single thing is going to eliminate the potential for someone to sink into that kind of darkness. Instead, I think that the most important thing by far is that everyone—each and every person—look out for someone they know who seems in danger of slipping off that cliff, into nihilism, total darkness and destruction. That person needs a hand, be it just some friendly time, or some mental health attention, and/or some compassion and some love. One can never know what small effort might make a difference and save someone from his or her own abyss.

Even sharing a few kind words can sometimes influence someone who is feeling low for the better. Maybe even answering a question from a kid about a quote that struck a chord with him.

But, on the other hand, maybe it doesn’t matter. And, in the end, is it really worth risking your job over?