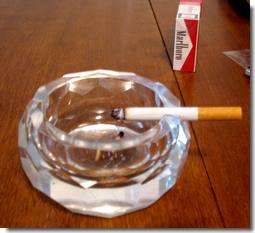 I don’t even trust my own doctor, let alone some nameless “California health officials” who dish out impossible-to-verify estimates. Garbage piled upon garbage ultimately will add up to a hill of the same stuff, and the Surgeon General is planting his flag squarely upon that edifice.

As an ex-smoker, the one thing that comes close to making me take up the habit again is seeing the persecution of today’s smokers. Back when I was a little lad, my parents didn’t smoke, but ashtrays were kept in the house to be offered to visitors who did. I learned that the proper answer to someone asking, “Will it bother you if I smoke?” is “Of-course not! Go right ahead.” It had something to do with courtesy, hospitality and tolerance of each others’ vices (we do all have them, after all). Of-course, courtesy was also expected from the smoker, too—the asking of permission being one part of it, and the avoidance of smoking to such an excess that it could not but annoy others. It was always, perhaps, an uneasy kind of détente, but it was based, as said, on a mutual understanding of human foible and a willingness to accommodate one another cheerfully.

Those days are all but gone, of-course, and today’s Surgeon General report will only fuel the lawmakers and the professional nannies and the busy-bodies who will not be satisfied until things like courtesy, hospitality and tolerance are proscribed by law—unless they are inscribed in law.