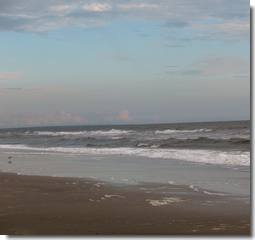 Then there’s the other story: Researchers at Johns Hopkins University have concluded that most people who are treated for depression in the United States have not actually met the criteria for the condition (which include a “debilitating loss of interest in daily life and a depressed mood lasting at least two weeks”). Nevertheless, most people who are treated for depression—whether they’ve met the criteria or not—are treated with antidepressant medications. Even if you’ve never encountered these medications personally and read the enclosed side-effects, the odds are that you’ve seen the commercials and heard the warnings about how they might cause “suicidal-thoughts,” amongst other lesser horrors, while the images of smiling, happy people gamboling in the sun continue to run on the screen. END_OF_DOCUMENT_TOKEN_TO_BE_REPLACED 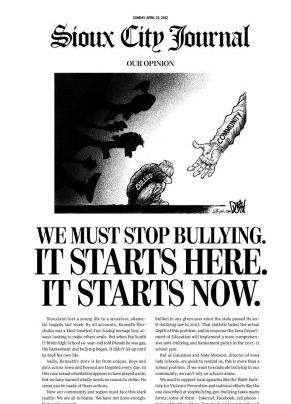 I’ve opined in this space on this subject before, but today can’t help myself from doing so once again, in response to yet another highpoint in the swirling mass-hysteria that has seemingly engulfed so many over the concept of bullying.

An Iowa newspaper—The Sioux City Journal—generated a great deal of attention a few days ago when they devoted their front page to an editorial decrying bullying. It was prompted by the death of a 14 year-old Iowan boy. He had committed suicide, reportedly in the wake of being harassed and bullied because he had “come out” to friends as being gay. The editorial, like so many other columns and public declarations on the topic, extends great sympathy and pity to the suicide victim, while making no bones about blaming those who bullied him for his death, and blaming society-at-large for failing to spot what was happening and failing to halt the bullying.

Bullying is bad. It’s wrong to be mean to people. “Love your neighbor as yourself;” following that rule rules out bullying, and that rule should be followed. Kids who bully other kids should be called to account for it. But human nature—and especially juvenile human nature—being what it is, there will always be bullies, as there always have been. When someone kills him or herself, however, the bigger problem is surely the response to the bullying. We call someone who kills him or herself a “suicide victim,” for a reason. That person has taken his or her own life; he or she is a victim of his or her own act of suicide. It is the wrong response to any kind of bullying or indeed to any challenge that life throws in a young person’s path. It eliminates any chance of a positive change in circumstance. It wastes an entire human life. And it wounds those who knew and loved the suicide victim in ways that will never heal. It is simply a crime, and an awful one. This is why when someone threatens suicide that person can be involuntarily committed to a mental institution on that basis alone. Force is employed if necessary to prevent the crime from being committed.

Indeed, if you publicly threaten suicide, you will not be held up as a figure deserving of tearful tributes and poignantly-composed editorials. Why, then, when someone succeeds in doing it, should that person—now a corpse and so unable to hear any of the sympathetic words—be fawned over in this way? And more importantly, what is the message being sent to other kids who find themselves victimized by cruel peers? They are being told that if they do the same deed there will be front page stories, TV news features and memorial services in tribute to them, with everyone crying in pity for their terrible hardship and castigating the idiots who tortured them. I humbly suggest that this is not the way to reduce teen suicides. It is instead feeding the swamp of the potentially-lethal self-pity in which bullying-victims may be tempted to wallow.

Kids should by all means be taught—and I think by parents in preference to school officials—that there are ways of dealing with bullying. But they must also be taught that the biggest mistake is to make a bully or bullies the center of one’s existence—to give them that kind of power. Even in the age of internet postings and text messages, the old adage holds true, like so many old adages: Sticks and stones may break my bones, but names can never hurt me. Time passes; even high school has an end. Above all else, kids must be taught never to even consider taking their own lives. It is not laudable. It is not a solution. It does not make you a hero. It is a crime, and one far worse than any juvenile insult.

It may in fact be the one truly unforgivable crime, at least in this sense: When you’re dead, it’s too late to say you’re sorry.

Happy birthday, Bob Dylan, from your friends in the world of “respectable journalism.”

A “never before heard interview” Bob Dylan did with biographer Robert Shelton is being touted as “a revelation,” and “extraordinary.” (Hear via the BBC at this link — and thanks very much to reader Jay for that.)

On the tapes, recorded in 1966, Dylan claims to have had a $25 dollar a day heroin habit at one time, and also claims to have kicked it. He also talks about how he would consider killing himself by shooting himself in the head or jumping out a window.

We are told that there is already a plan to make a film based on these tapes. Unbelievable!

There’s one small problem with this story: END_OF_DOCUMENT_TOKEN_TO_BE_REPLACED