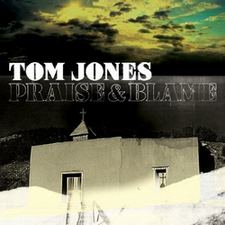 and has a distinct tilt towards songs of faith, like What Good Am I?, Didn’t It Rain, and Lord Help the Poor and Needy. Now, an e-mail from the vice-president of Island Records, David Sharpe, has been leaked by someone, and it indicates some extreme displeasure with the Tom’s latest musical direction. From WalesOnline:

Mr Sharpe fumed to colleagues: “I have just listened to the album and want to know if this is some sick joke?”

[…] [The e-mail] stated: “We did not invest a fortune in an established artist for him to deliver 12 tracks from the common book of prayer.

“This is certainly not what we paid for.”

Jones is not happy about this and is making his feelings clear.

“In the press it says that I’ve gone off and made something that the record company didn’t pay me for and that they don’t like it.

“People tell me that all publicity is good publicity, that’s what I’ve been told.

“Hopefully, if there’s any good that comes out of it, it’s that people will wonder about [the new album]. But it isn’t the way I would handle it by going and making a stupid statement. That’s not going to help it.

Some people, perhaps including Tom Jones, are not entirely sure if this e-mail reflected Sharpe’s real opinions or if the leaking of it is in fact a kind of publicity stunt. However, I think we may mislead ourselves by assuming too much deviousness, when in fact Sharpe’s scathing response to Tom Jones’ gospel music is pretty much par for the course amongst record executives when one of their secular artists makes this kind of move.

It’s well established history how the execs at Columbia hated Bob Dylan’s gospel stuff, and went out of their way to bury Saved.

(Some conspiracy theorists even suspect they sabotaged the mix on that record.) I’ve written in a different venue on how Paddy McAloon’s masterpiece Let’s Change the World With Music

was dismissed, if not suppressed, by those in control of the purse strings at Sony in the U.K. back in 1992, reportedly because of discomfort with numerous references to the divine in the songs’ lyrics.

The only thing I wonder is this: In these cases, do the record company executives oppose songs of faith because they genuinely believe that kind of music won’t sell (in which case I think they’re grossly mistaken) or does the attitude come from a deep antipathy towards the very concept of belief in God?

Motivations tend to be messy, so what’s going on is probably a combination of the two, but I would not at all underestimate the latter cause.

I do note that it’s quite sad that an Englishman would refer to the venerable old Book of Common Prayer as the “common book of prayer.”