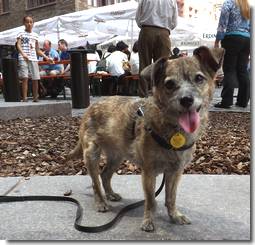 As far as the actual results of the research go, Professor Berns believe he has demonstrated based on their brain activity that dogs experience pleasurable anticipation when they are offered an edible treat, and also when they are given evidence (olfactory or otherwise) that their owner is nearby. This is based on activity in the area of the caudate nucleus. END_OF_DOCUMENT_TOKEN_TO_BE_REPLACED