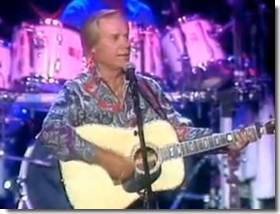 He had a life that was full—at times far too full, which makes it such a blessing that he lasted this long—yet there’s something unusually sad about the news of his loss for me today, and I’m sure for countless others. We’re commonly told of how so many people are irreplaceable, and no doubt everyone is irreplaceable, but George Jones must then count as being exceptionally irreplaceable. I wasn’t much of a fan of his as a young lad, but grew to deeply love his music in recent years. His ability to wring so many spoonfuls of nuance out of the singing of a single syllable … the peerless way in which he expressed vulnerability, pain, and hopeless love. And, then, the way at other times he could be a supreme hoot. END_OF_DOCUMENT_TOKEN_TO_BE_REPLACED 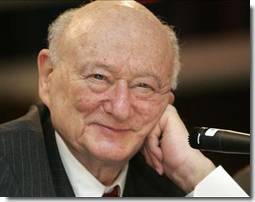 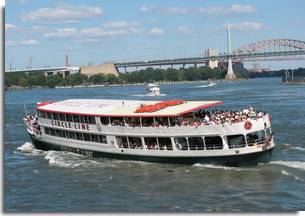 The story is especially funny, I think, because it is so very easy to picture him doing this. END_OF_DOCUMENT_TOKEN_TO_BE_REPLACED

He was 79 years old when he received the (very first) “Neglected Masters Award” from the Poetry Foundation and Poetry Magazine. His “Selected Poems,” edited by Christopher Ricks, was then published by the Library of America. (I wrote on that book previously at this link.) END_OF_DOCUMENT_TOKEN_TO_BE_REPLACED 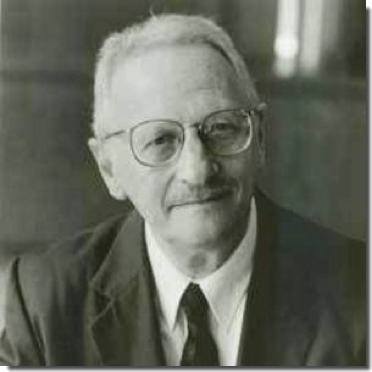 Rabbi Leon Klenicki died this past January 25th, and may he rest in peace. By all accounts he was a giant for the last several decades in the field of Jewish/Christian dialogue.

In 1989, a book was published called “Believing Today: Jew & Christian in Conversation.” It was in effect a conversation between Rabbi Klenicki and Richard John Neuhaus (then a Lutheran pastor). I’ve found this little book to be endlessly fascinating, and I get some fresh illumination every time I pick it up again. Neither Klenicki nor Neuhaus are pretending to represent every practitioner of their respective faiths; it is just what it is: a conversation between two intelligent and knowledgeable believers who value being faithful to their respective traditions. There is no subject from which the two men shy away, be it the history of Christian anti-Semitism, the holocaust, the Messiah, the secularizing impulses of American Jewry, etc, etc. The book is not about holding hands and pretending that everyone believes the same things, but rather about understanding differences, and probing for genuine and firmly-based common ground. Which seem like good goals for Jewish/Christian relations in general. END_OF_DOCUMENT_TOKEN_TO_BE_REPLACED

I would like to write once more in connection with the passing of Fr. Richard John Neuhaus. After this, when I refer to him, it will be no longer be in the context of his death; rather, it will be in the sense of the continuing life of his words and work, as the occasion presents itself. END_OF_DOCUMENT_TOKEN_TO_BE_REPLACED

Just some more things out there pertaining to the late Richard John Neuhaus that I’ve found rewarding:

In NRO, from Rabbi David Novak, this heartfelt piece: RJN and the Jews.

At the First Things blog, reflections from Stefan McDaniel: “Some giants labored in that cloud …”

From the Times of London, click here for a strong-minded obituary, from a more historical perspective, for RJN from an anonymous but seemingly well-informed author.

And this online archive of homilies by Richard John Neuhaus which he gave during masses he said at Columbia University during some spring semesters. Sound quality is mixed but there you go.

And the text of RJN’s resounding speech in July last to the convention of the National Right To Life Committee: We Shall Not Weary, We Shall Not Rest.

There are many touching remembrances of Richard John Neuhaus being published far and near. In this passage from Hadley Arkes’s tribute (beginning about halfway down this page), he humorously recalls hearing the rumors that RJN was to convert from Lutheranism to Catholicism:

But before there had been any announcement, and while the benign gossip had been making its way within “the family,” I phoned: “Richard, I just wanted to tell you that I’ve heard the news, or I’ve heard versions of it, and I want to be among the first to congratulate you. For the word is that you are about to join the Lubovachers.” He said, “Hadley, I’ll never forget this conversation.” About a year or so later, we were gathered at the seminary at Dunwoodie for his ordination, and Cardinal O’Connor, with his characteristic humor, said, “Richard, you don’t deserve this ….any more than I deserve the honor of being here, ministering to you.” Richard was just lit up that afternoon, with a freshness and sparkle rare even for him, as we all gathered in the garden after the ceremony. I noted again “the family” gathered around – George Weigel, Bob Royal, David Novak, Midge Decter, Norman Podhoretz.

And I couldn’t help wondering what Cardinal O’Connor would make of it all: Who was this man, with so wide a reach, bringing in with him this contingent so varied that it included Jews? He would offer his prayers to the God of Abraham, Isaac, and Jacob; it was the Catholicism of John Paul II, which incorporated the Jewish tradition. Were the Jews on the way to Rome? Or was it that Rome had brought the Jewish ethic to the rest of the world? As one friend put it, When you’re Catholic, you are at least Jewish. And that sense of things, nurtured by Richard, has marked the cast in which I too would find myself moving.

END_OF_DOCUMENT_TOKEN_TO_BE_REPLACED

It is one of many of Richard John Neuhaus’s unique gifts to this world that after his death there exist countless words of his own that can strengthen those who miss him. When it came to dying and indeed his own death, he literally wrote the book on it. The book is As I Lay Dying: Meditations Upon Returning.

I quoted briefly from it yesterday and here is another excerpt (and what a beautiful piece of prose this truly is, of the kind that RJN was able to conjure so often): END_OF_DOCUMENT_TOKEN_TO_BE_REPLACED