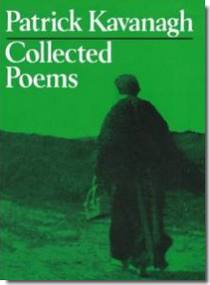 Morrison and Kavanagh meet and shake hands, figuratively speaking, when Van sings “Raglan Road,” a poem that Kavanagh wrote for the old Irish air, The Dawning of the Day. It’s available on Van’s classic album with the Chieftains, Irish Heartbeat, and can currently be heard via the YouTube clip below. END_OF_DOCUMENT_TOKEN_TO_BE_REPLACED

Happy Chanukah to Jewish friends and readers, that festival having begun yesterday evening and continuing until next Sunday. Here in New York City one can have a tangible sense of the holiday being celebrated without being Jewish, due to the make up of the population, a sense which I must assume is pretty uncommon elsewhere. It is one of the nice things about this city.

Although (judging by appearances in the stores) it seems that Christmas began sometime in October, it is still weeks away. Yet, many Christians do continue to observe at least some of the traditions of the season known as Advent, a time of anticipation of the arrival of Jesus. It encompasses roughly four weeks in advance of December 25th, today counting as the second Sunday of this year’s Advent season. I’m far from being the religious historian or theologian to attempt to fully explain the tradition, which has many rich and varied aspects, but on a very basic level I would judge its purpose is to help in nurturing and recalling a sense of longing for the Messiah. This is a strange thing, and maybe all the more worthy of cherishing for that reason. People who grow up as Christians, whether in actuality or merely nominally to one degree or another, are naturally prone to taking the birth of Jesus for granted. It’s old-hat, even. Yeah, Jesus was born, whether it was 2012 years ago or a few years earlier. But we’ve moved beyond all that now. We’ve got other problems.

Advent offers a means of stepping back and remembering why the arrival of such a Savior was something for which to yearn. Then, the celebration of His arrival can be something more than rote and something more than just a religious holiday that coincides with the zenith of the retail year. It can rather be something that gives genuine relief to souls badly in need of it.

Advent has its own songs. Tunes like “Jingle Bells Will Be Ringing Soon” and “Santa Claus Is Beginning to Make Plans to Travel.” But those are just the secular ones. An Advent hymn heard at church today was “On Jordan’s Banks the Baptist’s Cry.”

On Jordan’s bank the Baptist’s cry
announces that the Lord is nigh;
awake and hearken, for he brings
glad tidings of the King of kings.

Then cleansed be every breast from sin;
make straight the way for God within,
prepare we in our hearts a home
where such a mighty Guest may come.

The reference is to John the Baptist, who didn’t actually foretell the birth of Jesus (as he was a contemporary) but foretold His ministry. The Gospel reading in many churches today would have been from Luke, chapter three, and also concerned John the Baptist. It struck me in one particular way this morning. A slightly abridged version:

In the fifteenth year of the reign of Tiberius Caesar … the word of God came to John the son of Zechariah in the wilderness. And he went into all the region around the Jordan, proclaiming a baptism of repentance for the forgiveness of sins. As it is written in the book of the words of Isaiah the prophet,

“The voice of one crying in the wilderness:
‘Prepare the way of the Lord,
make his paths straight.
Every valley shall be filled,
and every mountain and hill shall be made low,
and the crooked shall become straight,
and the rough places shall become level ways,
and all flesh shall see the salvation of God.'”

What happened to strike me this morning was this concrete example of why all Christians at least ought to be extremely dubious of anyone who claims they know how any biblical prophecy will actually be fulfilled. The evangelist Luke is indicating pretty clearly that the passage from Isaiah (chapter 40) is a foretelling of the ministry of John the Baptist. (In the Gospel of John, this same assertion is attributed to John the Baptist himself.) A Jewish exegesis of this passage would inevitably be different. But when one piece of Holy Scripture (of the New Testament) characterizes another piece of Holy Scripture (of the Old Testament) in this way, believing Christians pretty much have to take it as, well, the Gospel truth. What does it mean to accept that this prophecy was fulfilled in this very specific way?

“Every valley shall be filled, and every mountain and hill shall be made low …” Is that what John the Baptist did? It is glorious language from Isaiah, poetic and powerful and rightly stirring. Yet, on the most mundane level, what John the Baptist did was to preach repentance from sin, which was something that prophets had done often before to the people of Israel, and in his way he inspired a kind of spiritual revival amongst those who listened to him. He wasn’t saying anything so dramatically new—I don’t think—but instead was reminding people of the urgency of repentance and of following God’s law. Although very few of his words have been recorded (only those few that are in the Gospels) he was apparently very inspiring to those who heard him. Even King Herod of the time, a decadent and corrupt man by all accounts, was intrigued and compelled by things that John the Baptist preached. However, John didn’t literally fill the valleys and level the mountains. The physical geography remained unchanged. What he did was inspire people and gather followers, and when Jesus began his public ministry he found a ready audience in people who had already been following John. John was a warm-up act, one might say. Perhaps in a certain sense he did the spadework, helping to enable Jesus to work at a higher level in his own preaching. END_OF_DOCUMENT_TOKEN_TO_BE_REPLACED