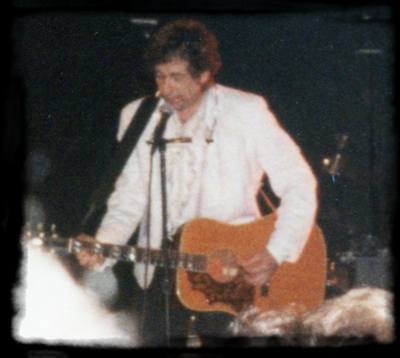 Thanks to John W. who forwards me a recent interview with Greil Marcus in a Minnesota paper. He thought this part in particular would interest me:

One of the major events in my parallel life with Bob Dylan, which any fan has if you follow his work and his ups and downs … was election night in 2008 when he played the University of Minnesota for the first time. I just thought that was a fabulous event. I loved the way he timed the show so that it would end five minutes before the election would be called, so that everybody would be out in the lobby when the TV screen went on. I just felt like that was so appropriate, so not accidental. And ending the concert with that weird comment—“I was born in the year of Pearl Harbor, and it’s been an age of darkness ever since. But now I think things are about to change.” And that’s him just saying, “I know this is a special night, and none of us knows what, if any, changes in our own lives this is going to mean, but we all hope it will mean some change.” And I think when someone as in his own world as Bob Dylan can join his audience … I can’t imagine that would have happened in Poughkeepsie, or Birmingham or Seattle.

When Dylan’s remarks on election night of 2008 were first reported in the press, it was presented as Bob basically hailing Barack Obama’s great victory, with a triumphant “Things are gonna change now!” Greil Marcus’s tone is different to that here, but still slanted in a certain way. Back in November of 2008, I wrote on Bob Dylan’s election night remarks at some (perhaps painful) length. I wasn’t relying on any paraphrase in the press or half-heard snippets. I quoted his full remarks, and provided the audio as well. Then I reflected on what Dylan seemed to be getting at, given the full context, versus how it was being reported, and even versus how it was heard by those present, many of whom were (naturally enough) pregnant with expectations related to the election. With hindsight, despite the longwindedness, I stand by the substance of what I wrote. Briefly put, I thought and think that there was a deep (and intentional) irony in Dylan’s words, notwithstanding the fact that he likely knew it would be missed by most in the audience that night. I ended my reflection with a biblical quote from Psalm 118: “It is better to put trust in the LORD than to put confidence in princes.” I thought then and continue to think that that says more about where Dylan is coming from than anything I could say. It surprises me, still, that there are people who listen to Dylan’s music for years and for decades who don’t seem to get this.

As for Greil Marcus’s theory that Bob Dylan went out of his way to end his performance that night at the very moment that the election results were coming out … aww, never mind. You gotta let it go sometimes.

On a different note, it certainly did make me smile to read Marcus’s line about his “parallel life with Bob Dylan.” I do know what he means, in terms of how fans can feel, even if I might tend to see Greil Marcus (not to mention some other prominent rock critics) as being more like the Joker to Bob’s Batman, as parallel lives go. Marcus is of Dylan’s generation (as also is Dick Cheney, for instance), so the parallel concept can come into play for him. I am not of that generation, so I’ve never really thought about my life as being parallel to Bob Dylan’s as such, but I think any dedicated fan of Dylan could define some kind of relationship between events in his or her life and particular music of Bob’s. It’s not that the music brought on the events (necessarily!) but that the music was there when the events occurred, and the music was there again after the dust settled on those events.

What I’ve found fascinating about this phenomenon, and continue to find fascinating, is how so much of Dylan’s music seems to change and deepen with the passing of the years, so that in the wake of events that change one’s perceptions and perspective, Bob’s songs don’t end up sounding trite or crass but instead are prone to produce the aaah moment, as in “Aaah, so that’s what that was about all along …” That’s kinda why we keep listening, isn’t it?