With the official release of Tempest by Bob Dylan coming in seven days, the full-length reviews are beginning to appear in the press. People appear to like it a lot. I can’t be sure, but I’m beginning to suspect that this might be the break-out album for Bob Dylan—the one that makes him a household name.

On the other hand, maybe not. If it flops, I guess he’ll have to just go back to writing songs for Adele and Tom Jones.

Joking aside, just as with the “preview” reviews, one can very quickly read too much of the “real” reviews, and so I’ve really only been glancing. Like most mortals, I’m looking forward to hearing the record(s) completely myself, and I suppose I’ll get round to writing something about it here afterwards.

The promotion for it has been quite something. From the “listening locations” where even now one can hear tracks streamed to one’s “device,” to the “pop-up stores” where one will be able to go on the evening before the release to buy it early … and all of this began with those “listening sessions” for select members of the intelligentsia, who were all blown away. In total it amounts to a perfect storm. Put another way, an ideal tempest.

It’s amazing to contemplate. If you’d told someone back in 1970 that forty-two years hence the release of a new Bob Dylan album would be such a huge occasion, they’d have thought you were smoking something rare and potent indeed. After Self Portrait? How much could the guy possibly have left in him? Even New Morning seemed no more than a half-way return-to-form to most people. No one could have conceived that in the year 2012 Bob Dylan would actually be one of the the surest bets in the world of popular music. Because as strange as it sounds, that’s what he is today. But the thing to celebrate is that he’s done it on his own terms. He’s being who he is. People just happen to like it. END_OF_DOCUMENT_TOKEN_TO_BE_REPLACED

It’s a kind of marketing with which we’re becoming familiar from the Bob Dylan “camp”: rumors of a new album being recorded, followed weeks or months later by an official announcement, and then the granting of a “listening session” to certain select music journalists, with the proviso, mind you, that no notes be taken.

It’s been a highly effective way of creating a buzz (and Dylan has had two albums which entered various charts around the world at number one in the past decade). However, lest we dismiss it too cynically as a hyping mechanism, we should at least bear in mind that were one of these people at a listening session to come away saying how incredibly dull the record was (“I almost fell asleep! I just wanted to escape!”) then that would not do much for the sales prospects. You can avoid that to some degree by picking people whom you expect will enjoy the music, but there’s no guarantees.

As far as I know, only one writer who’s heard the forthcoming album has said anything about it to date, and that’s Allan Jones of the UK’s Uncut magazine. He did not fall asleep, it seems. After four or five tracks, he says, he was only thinking “how much better is this thing going to get?” Now that’s the kind of buzz you really like to have.

In terms of concrete characterizations, Jones really only says that the album has less of the “roadhouse blues” or “jazzy riverboat shuffles” that has populated the last three Dylan albums, but he alludes instead to songs like “Red River Shore” or “’Cross the Green Mountain” in terms of what the new record feels like. Those are great songs; in fact they are unforgettable classics of Dylan’s latter-day career. Again, high marks for buzz, although I do presume that Allan Jones is merely giving his honest impression rather than trying to hype anything.
END_OF_DOCUMENT_TOKEN_TO_BE_REPLACED 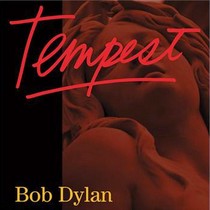 has come via a press release at BobDylan.com.

There’s not a lot of info there, other than the release date, the cover image, and the fact that it will contain ten songs. Long-time Dylan-related publication ISIS has the names of the songs:

It is rumored that one song deals with the Titanic, and another invokes John Lennon (no prize for guessing which one the latter may be). ISIS also reports that those who’ve heard the album rate it very highly indeed. END_OF_DOCUMENT_TOKEN_TO_BE_REPLACED