What is it about a great Ron Sexsmith song that can be so very pleasing and satisfying, right on the first hearing? I was trying to work that out while listening to one after another on his latest album, Forever Endeavor. For me at least I think it’s something like this: One has heard in one’s lifetime a whole lot of songs, by artists one likes a little or a lot, and there are so many instances where a song begins with promise but instead of fulfilling that promise it gets stuck, or reaches for a height it cannot attain. Sexsmith at his best can turn out a tune that is just so right, musically and lyrically, and seems to arrive and unfold effortlessly. He writes with an innate knowledge of so much of what’s come before him, and blends musical and lyrical references without strain.

Take just one song on this record. We’ve all heard of “Lonely Avenue,” but Ron Sexsmith gives us “If Only Avenue,” with a perfectly wistful and irresistible melody.

With the luxury of hindsight
The past becomes so clear
As I look out on the twilight
My days have become years
It’s strange, as people we’re prone to dwell
On things that we can’t undo
And we’re liable to wander down
If Only Avenue

Cue the wonderfully languid riff that anchors the tune, and basically there’s nothing you can say about this short, unpretentious pop song other than that it is flawless, and could easily be taken for a standard written forty years ago. As on a number of other tracks, producer Mitchell Froom has added string arrangements that are understated and apropos. The whole thing is just a sheer pleasure. END_OF_DOCUMENT_TOKEN_TO_BE_REPLACED 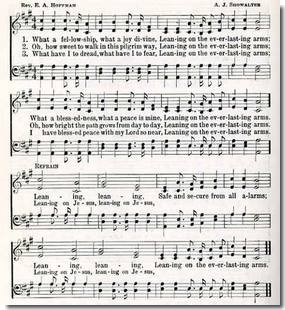 The final blessing of Moses on the people of Israel is described in chapter 33 of Deuteronomy. The first part of verse 27 goes like this (ESV):

The famous American hymn, “Leaning on the Everlasting Arms,” was published in 1887, and was composed by two Presbyterian men, namely Anthony J. Showalter and Elisha Hoffman. It was Showalter who received the initial inspiration, writing the refrain and the melody, reportedly after reaching for the above scriptural verse to console two former students of his who had both recently lost their wives. He then asked Hoffman—a prodigious hymn-writer credited with over 2000 religious songs—if he could come up with lyrics for the verses. Naturally he could.

As natural a function of the soul as breathing is of the body: What an inspired way of thinking about the singing of these kinds of songs. It immediately reminded me of the quote highlighted in this space last week from Abraham Joshua Heschel, where he says of losing oneself to prayerful music that: “it is not an escape but a return to one’s origins.” END_OF_DOCUMENT_TOKEN_TO_BE_REPLACED

Yours truly spent some years without any easily definable or shall-we-say-biblical beliefs, but never shook off a belief in a God at the bottom of it all, and there’s no question that a love of music was the major reason for that. And it was purely popular music which I listened to during those years, and indeed that remains the form of music I’m happy to listen to most, hour for hour (albeit that some of it stretches the definition of “popular”). Being able to detect some shred of the transcendent in a song and performance which brought tears to my eyes for reasons that were ultimately inexpressible kept me in mind of the fact that there was, after all, a transcendence out there. Many are happy enough to concede the reality of an impersonal transcendence, but to me at least it’s always felt very personal in those moments, shot through with mercy and with hope. END_OF_DOCUMENT_TOKEN_TO_BE_REPLACED

I think that “Amen” is as harrowing a song as he’s ever written. To my ears at any rate it is a deep moan to God, without sentimentality, laying out the worst of this world, begging maybe just to be able to believe it will be put right. Can God really want us, actually love us, after all of it? It’s a prayer for the evidence. END_OF_DOCUMENT_TOKEN_TO_BE_REPLACED