A few years back I wrote in this space about a public school in New York City that was utilizing the Hindu concept of karma to teach good behavior to its students, as evidenced by prominent signs both outside and inside the school referring to karma and relating it to specific behaviors. That was the Robert F. Kennedy school (PS 169) on the upper east side of Manhattan. The ultimate point of my piece was to highlight the double standard inherent in this vast official employment of a Hindu religious concept in an American public school, whereas posting the Ten Commandments or the Beatitudes would have brought speedy intervention by those who are out there trying to protect young and impressionable minds from any Judeo-Christian influence. Why would the latter amount to a “state establishment of religion,” while plastering the entire school with postings about karma was regarded as entirely benign? I concluded that I didn’t really have a problem with the karma stuff, if it worked, but I did have a problem with the message implicitly being conveyed to students that Hindu religious concepts are fine to teach and follow, while the banned Judeo-Christian ones must be somehow toxic. END_OF_DOCUMENT_TOKEN_TO_BE_REPLACED

Half a billion dollars in federally guaranteed loans from the Obama administration to a company which is manufacturing its electric cars (called “Karma cars”) in Finland. Oh, America, what did you do?

Although I’m not personally an advocate of this idea of actively expunging religious concepts from the natural life and thought that would take place in schools, I do understand the concept. It’s why, when passing a public school in my New York City neighborhood, I’ve raised my eyebrow at a sign that has long hung over the main entrance. It says: “Robert F. Kennedy Students Have KARMA.” That’s PS 169, of the New York City Public School system. 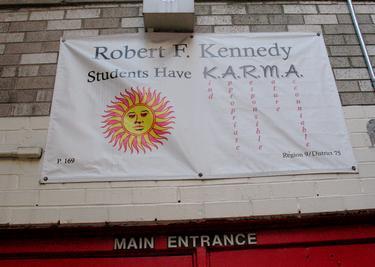 The students have KARMA? I think most of us know what the word means, but let’s go to Merriam-Webster for an official definition: It is “the force generated by a person’s actions held in Hinduism and Buddhism to perpetuate transmigration and in its ethical consequences to determine the nature of the person’s next existence.”

PS 169 is neither a Hindu nor a Buddhist school, but is, as mentioned, a New York City public school. So this is why my eyebrow was raised. Still and all, you see a lot of things in New York City, and you learn to keep walking. It was only one poster.

Recently, however, I had occasion to visit the same school on other business (voting). Walking through the lobby and hallways, I couldn’t help but notice that this “KARMA” concept was repeated. Again and again. It seemed to be all over the place, in fact, and in a myriad of different incarnations.

One posting says “GOOD KARMA,” with a picture of a scale, and the exhortation, “BALANCE OUT THOSE NEGATIVE VIBES.” We’re assured that “P169 HAS GOOD KARMA.” 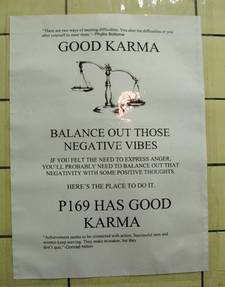 Another (my favorite) says that “STUDENTS WITH KARMA REMOVE HATS GIVE ALL CELLPHONES, IPODS, ETC. TO MR. REEVES.” 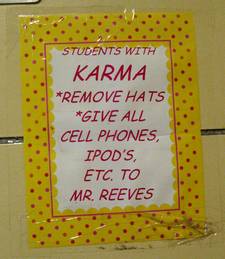 Another sign—this one quite elaborately constructed in three dimensions—presents each letter of KARMA as the first letter of another word: Kind, Appropriate, Responsible, Mature, Accountable. There’s a big smiling sun perched alongside. 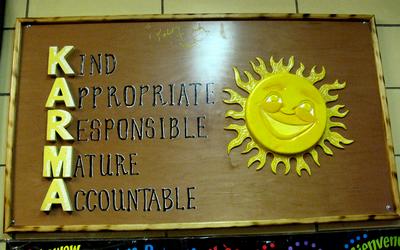 So, that’s the root of this. Further research found evaluations of the school on an official New York City government website, and documentation regarding the “KARMA” behavior modification program, which has apparently been in place since at least 2006. As in this report (.pdf):

The school’s philosophy is that achievement is inextricably linked to behavior, so to that end the school has implemented the ‘KARMA’ initiative in school, standing for kindness, appropriacy, responsibility, maturity, accountability. All activity in the school is linked to ‘KARMA,’ from clarity about which behaviors are expected in which location in the school, to a rewards and sanctions system, in which students can “buy” such things as leisure time on the computer, book bags and pencils with the rewards of good behavior. This is reinforced in every lesson, every classroom and by every member of staff.

“KARMA” is an acronym for these behaviors and attitudes that the school wishes to encourage. Clearly, though, the use of the term also plays on the original Hindu/Buddhist concept of consequences for ethical choices. In all, it’s really very clever.

However, imagine if instead of “Robert F. Kennedy students have KARMA,” the signs said, “Robert F. Kennedy students are filled with the Holy Spirit.” Maybe someone could come up with qualities worth promoting which corresponded with those letters; let me see … HOLY: Happiness; Orderliness; Levelheadedness; Youthfulness; SPIRIT: Sensitivity; Patience; Irony; Readiness; Imperturbability; Tolerance. (I make no claim to be an expert at this but you can get one for the right price.)

Or imagine if the signs said (God forbid!): “Robert F. Kennedy students follow the Ten Commandments.” Think of the heads that would explode. Picture, if you will, the ACLU helicopters swooping in to rescue the students before their helpless and innocent minds could be contaminated by such thoughts.

KARMA is assuredly a concept that has entered the common lingo, especially since John Lennon’s big hit record, but the same can certainly be said of concepts like the Holy Spirit and the Ten Commandments, which have been around for 2000 years and more. “Thou shalt not steal. Thou shalt not kill. Thou shalt not commit adultery.” Yet these words are proscribed in the public schools, while KARMA may be promoted?

It also needs to be noted that to the same degree as KARMA is a concept born of Hinduism and Buddhism it conflicts with Judeo-Christian beliefs. KARMA presumes a cycle of existence, of incarnation and reincarnation, that just doesn’t square with the Judeo-Christian belief in reckoning and justice from a particular God: the God of Abraham, Isaac and Jacob, the God Jesus called “Father.” The idea of reincarnation and KARMA appeals to New-Agey kinds of Westerners who are more comfortable worshiping an impersonal creation rather than a personal Creator, but for believing Christians and Jews it is plainly unbiblical.

Therefore plastering the idea of KARMA all over a public school is not a neutral act. It displaces Judeo-Christian thought and symbology (although those thoughts and symbols have already effectively been banned).

So, where does this all lead? Am I writing this because I want KARMA stripped from this school and any other school that might use it? No. Personally, I’m not greatly incensed by the cutesy use of this term in a program intended to improve student behavior. Maybe the program works. It’s not the use of the Hindu/Buddhist concept that bothers me, but rather the zero tolerance afforded to the Judeo-Christian God and related concepts. It’s the double-standard.

Another posting I came across in the school was a quote from Malcolm X: “If you don’t stand for something you will fall for anything.” 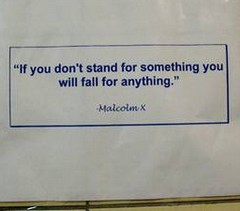 No big argument here. But it also brought to my mind another old aphorism (often attributed to G.K. Chesterton but apparently from a Belgian writer named Emile Cammaerts):

“When people stop believing in God, they don’t believe in nothing. They believe in anything.”

It’s merely my fantasy, of-course but I sure would like to see that posted prominently in the school. I think it might balance out a little of their KARMA.