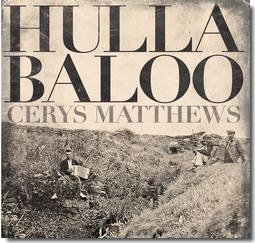 Hullabaloo is the eighth full-length solo album from Cerys Matthews, and the second to be devoted largely to traditional Welsh songs. It is in fact very much a sister album to 2010’s TIR, which was packaged similarly with sepia-colored photos from days gone by, with the songs’ lyrics lovingly laid out in Welsh and English along with notes on their background. In a certain sense Hullabaloo is a mirror-image of her first Welsh-traditional collection. While TIR included some lighter numbers it was anchored by such great, stirring ballads as “Myfanwy” and “Calon Lan;” whereas while Hullabaloo has some poignant ballads it is defined more by its uptempo and danceable tunes and arrangements. And while TIR was built upon voice and guitar, Hullabaloo flaunts a great ensemble of pipes, all manner of stringed instruments, esoteric percussion and whatever might be called for at the given moment.

Cerys Matthews excels at inspiriting and refreshing old tunes, and she also excels at finding and lifting up the common thread that runs through the really great songs from a variety of musical traditions. It’s very difficult (actually impossible) to define that thread in mere words, but one shot at it is to suggest that it is one entwined with insight into that which is fundamentally human and quite often that which is sacred; and, when it inhabits a melody and a lyric, it makes for a song that can stick around for centuries. END_OF_DOCUMENT_TOKEN_TO_BE_REPLACED