Yours truly spent some years without any easily definable or shall-we-say-biblical beliefs, but never shook off a belief in a God at the bottom of it all, and there’s no question that a love of music was the major reason for that. And it was purely popular music which I listened to during those years, and indeed that remains the form of music I’m happy to listen to most, hour for hour (albeit that some of it stretches the definition of “popular”). Being able to detect some shred of the transcendent in a song and performance which brought tears to my eyes for reasons that were ultimately inexpressible kept me in mind of the fact that there was, after all, a transcendence out there. Many are happy enough to concede the reality of an impersonal transcendence, but to me at least it’s always felt very personal in those moments, shot through with mercy and with hope. END_OF_DOCUMENT_TOKEN_TO_BE_REPLACED 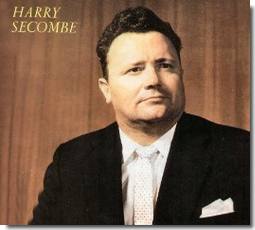 During the part of my childhood and adolescence which I spent living in Ireland, I recall encountering the “holy hour” that British television featured on a Sunday evening. There were shows like “Stars on Sunday” and “Songs of Praise” (the latter of which I believe still runs) where hymns would be sung, sometimes with grand cathedral choirs and celebrity guest vocalists.

Harry Secombe always seemed to be popping up in this context. Secombe (Sir Harry as of 1981) had achieved fame as a comedian, on the Goon Show from BBC Radio in the 1950s, with Peter Sellers and Spike Milligan. Even at this stage (the 1970s and early 80s) the Goon Show was something of which I couldn’t help but be aware. You would hear references to it: clips, re-runs, and latter day imitations. And of-course the alumni of the Goon Show had moved on to individual fame. So Harry Secombe was in my perception a Goon, and a significant part of his role as a Goon was in singing their daft little songs.

It seemed he must have lost his way somehow.

It was a little odd, then, to be flicking through the channels of a Sunday evening and suddenly see him standing there and performing—with what appeared to be total devotion and sincerity, in his large Welsh tenor—a big old hymn like “How Great Thou Art” or some such. I couldn’t make the connection between my one image of Harry Secombe and this other incarnation. It seemed he must have lost his way somehow.

I didn’t linger with the issue. Those kinds of TV programs were not for me, nor even for my more religiously-devout parents, truth be told. We were, after all, Roman Catholics, and Irish ones. These shows, it was well-enough understood, consisted of a bunch of English Protestants singing their Protestant songs. However sweetly they might sing them, it was just not something that belonged to us. These weren’t the same songs that were sung by the choir at Sunday Mass (not that anyone in the pews dared to sing along with the choir, of-course). There was a huge cultural chasm there, and the thing was basically incomprehensible to my youthful mind. Protestants on TV. British comedians singing hymns. Change the channel.

Times change. The passage of time often seems the great tragedy of life, but flip it over and it might also be the great blessing of our existence. For yours truly, having fallen away in my youth (with some significant enthusiasm) from observant Catholicism, I found my way back to church-going Christianity later in life in New York City through a Protestant church; specifically, through a traditionally-minded Lutheran congregation. One of the elements that both drew me in and continues to enrich my experience in that church is being able to hear and to sing songs from the great tradition of Christian hymnody. Some great hymns are shared by the various traditions, of-course, but I don’t think there can be any debate over the fact that the best damned songs of Christian devotion are ones written by Protestants; at the very least it must be conceded even by the pope that the Protestants have composed the greatest number of great hymns.

So, not terribly long ago, I was wasting time on YouTube as many of us are wont to do, and something I cannot name put Harry Secombe into my head, and I recalled the strange incomprehensible experience of seeing him sing hymns on a Sunday evening on British television. I thought I would like to see that odd thing again. I did not succeed in finding clips of him on those actual old TV programs, but there were many songs and slide-shows uploaded to YouTube by fans of Sir Harry, including of him singing various hymns just like those he would sing on those shows. One that popped out at me right away was Secombe singing “Abide with Me.” Simply put, Christian hymns do not come better than that one. I clicked on it, and hearing his voice sing that song even through my tinny computer speakers transfixed me in an other-worldly manner, one which I could not have imagined when I was twelve-years-old, flicking through the TV stations back in Ireland. More bluntly, it made me break down in uncontrollable tears.

There was not any longer any cultural chasm. Harry Secombe’s willingness to throw his comic persona to the wind and sing in this devotional manner no longer required any explanation, and the song was one that seemed to belong to me as surely as it belongs to anyone.

I was simply grateful that I had lived long enough to hear it like this.

“Abide with Me” (the lyric) was written in 1847 by Henry Lyte, a Scotsman and an Anglican. Three weeks after he finished it he died of tuberculosis.

The melody “Eventide,” credited to William Henry Monk in 1861, is the one most associated with the song.

Inexplicably, this song is commonly sung by crowds at sporting events in England. I guess you can’t outlaw it. (In truth, we should be very grateful for it. Perhaps, after all, there will always be an England … )

Abide with me; fast falls the eventide;
The darkness deepens; Lord with me abide.
When other helpers fail and comforts flee,
Help of the helpless, O abide with me.

I fear no foe, with Thee at hand to bless;
Ills have no weight, and tears no bitterness.
Where is death’s sting? Where, grave, thy victory?
I triumph still, if Thou abide with me.