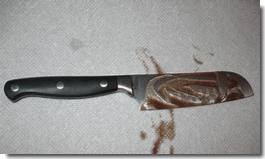 It’s a bloody and unspeakable vignette far too common in America and in this broken world generally. A 25-year-old man had been doing odd jobs in a neighborhood in Springfield Township, in the state of Ohio, including for a 92-year-old World War II veteran named Hugh, and his wife Ruby, aged 89. Apparently he got the idea that they might have a lot of cash in their home. One day he knocked on their door, which was opened by the frail 89-year-old Ruby. He made pleasant small talk, saying he’d soon be going to college, which made Ruby very glad. Then he asked if he could come in to use their telephone. On being ushered in, he talked with Ruby’s husband, Hugh, while she left the room. When she returned a minute later, she saw to her horror that he was wielding a knife and demanding money. Hugh was enraged, telling the young thug to “go to hell.” The punk swung the knife, slashing the elderly WWII veteran in the face and throat. He died on the floor from his wounds. The attacker then stabbed Ruby, pushing her to the ground. Then he apparently grabbed what he could find in the space of a few minutes. Cops who later picked him up—still in possession of the elderly couple’s credit cards and Ruby’s wedding and engagement rings—estimated that he basically had gotten away with a couple of hundred dollars in cash. Ruby survived long enough to describe to the police what had occurred, but died a week after the brutal attack. END_OF_DOCUMENT_TOKEN_TO_BE_REPLACED

Somehow I had not seen this, and thanks to Sue for e-mailing and apprising me of it. It’s an interview, which is on YouTube, with Carlos Santana and Bob Dylan from August 21st, 1993, in Memorial Stadium, Seattle — done for MTV, apparently. See below, and then below that are some remarks from Yours Truly and notable quotes from the interview.

If you haven’t seen it, the first question that might occur to you—as it did to me—is “Why is Bob doing this?” He seems spectacularly uncomfortable and edgy, even by his standards, and gives the interviewer (who in any case is pretty misguided) the hardest time imaginable. It can only be that Carlos Santana strong-armed Dylan into doing it; “Hey man, you gotta come over with me and do this, man, it’s for MTV, y’know they really want to talk to you, c’mon, it’ll be good publicity, do it for me.”

But, regardless of the reason for Dylan doing it, the end result is hilarious. The first question to Bob:

Q: Let’s talk about the tour. Has it been enjoyable to be on tour together?

Dylan: [in a taciturn tone] So far.

And it gets better. Carlos Santana is at the same time a dramatic study in contrast, dishing out smooth, articulate, politically correct patter to every question that Dylan, for his part, vaults into the Andromeda galaxy. Dylan’s facial expressions and rolling eyes are just priceless. Watch it all and bust a gut, but here are some transcribed extracts:

Dylan: Ah, current music. What would that be? Ah, really, a lot of it sounds defective to me. It makes me restless.

Q: This is directed to Bob. You’ve given permission to have Like A Rolling Stone sampled for the first time. How did that ever come about?

Dylan: Who did that?

Q: Ok. Y’know, Bill Cutler, the producer of that, says that you being the first street poet, were really the first rapper. How do you feel about that?

Dylan: Ah, everybody’s the first somebody, y’know. [scratching his chin]

Q: In the context of that, do you see the relationship between politically aware rap and some of the stuff you were doing years ago?

Dylan: Maybe there’s some kind of correlation but whatever it is it wouldn’t be [inaudible] for me to say that.

Q: It seems kind of ironic that Sinead O’Connor was booed off of your concert [30th Anniversary shindig], it seems ironic because they’re honoring someone who pioneered protest music and they seemed to be booing her for protesting. What do you say about that?

Dylan: [shaking his head and smiling] Y’know, she’s grown-up. Y’know, people do whatever they want to do, y’know. Shouldn’t really take it as an insult though, y’know, uh, Elvis even got booed. So, that’s no big deal.

Q: In the current issue of Rolling Stone one of the writers criticize [Bob starts violently grimacing] a $65 top ticket and called it whopping and obscene and all of that stuff and says that you should suck on soap. How do you respond to somebody who writes something like that?

Dylan: No kind of way. He never got up there and sing anything. Connoisseurs, y’know, they’re all over the place, but, y’know, it’s different when you’re getting up there and you’re doing it. Anybody can be talking about it.

Dylan: How’s that for a response?

Q: This is for a thing we’re doing on violence. I’m going to ask some general questions. Do you think teen violence is a big problem in today’s society?

Dylan: Television causes a lot of that violence. That’s my opinion. People see it on TV and they wanna do it. That’s just my opinion. Whatever people see—TV in my mind forms people’s opinions. Y’all know that anyway [looks into the camera momentarily].

The pièce de resistance, for sure, is the exchange about guns:

Q: Do you think the availability of guns is a big problem today?

Q: What about guns among kids? Do you think it’s just too prevailing?

Dylan: Toy guns [widens his eyes humorously at the interviewer]. They got more toy guns than real guns, really.

Q: Where do you think kids get these guns?

Dylan: [smiling] They get ’em in a toy store.

Carlos gives a politically correct and frankly idiotic pro-gun control answer to a similar question—talks about letting people have guns but banning bullets. When he’s finished, Bob moves forward with his mouth open to say something, but the interviewer interrupts him with a question about his new record.

Q: One more question. Your new album is basically an acoustic album, done mostly in one takes. What led you to do that? Is it the unplugged trend?

Dylan: Well, it was just easy for me to do that, to make an album by myself. Anybody would do it if they could, really. Ah, Mick Jagger if he could get in a studio and record an album all by himself, y’know, he’d be probably the first one to do it.

And so there it ends.

Another reference point, by the way, with regard to Bob Dylan’s view on guns and gun control is his 1981 interview with (the late) Dave Herman. Herman—clearly a left/liberal himself—presses Bob on several political issues and each time gets gently but firmly pushed back. With regard to guns, there is the following exchange:

Herman: Are you on one side of the gun control issue or another? Do you think this business of all the guns we have in America … I notice here in London, the policemen don’t even have guns on their hips, they don’t carry weapons.

Dylan: But they have a much lower crime rate over here too. Well, you can’t change the States in that kind of way. It’s too many people. It didn’t get off on the right start … You know the United States is like gun crazy, always has been gun crazy. White man used to shoot the Indians with guns. Guns have been a great part of America’s past. So, there’s nothing you can do about it. The gun is just something which America has got, lives with. I don’t think gun control is making any difference at all. Just make it harder for people who need to be protected.