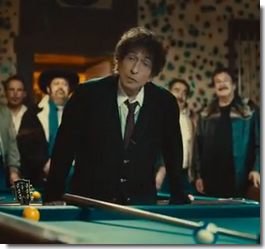 “We will build your car.” It’s weird-ass, funny, and ultimately-even-if-inexplicably cool. In other words, it’s typical Bob Dylan, and it’s his TV commercial for the Chrysler automobile manufacturing corporation which aired during the Super Bowl today. Video embedded below via YouTube.

Back In 2007, Bob Dylan starred in a commercial for the Cadillac Escalade. But in point of fact, you can’t accuse him of being fickle, because the content of the new ad is less a praise of Chrysler in particular as it is of American-made cars in general. And an ode to the uniqueness of America from a guy who knows a little something about it.

Addendum: Bob’s full text in this Chrysler ad, as transcribed by yours truly:

Is there anything more American than America? ‘Cos you can’t import a vision. You can’t fake true cool. You can’t duplicate legacy. Because what Detroit created was a first, and became an inspiration to the rest of the world. Yeah, Detroit made cars and cars made America. Making the best, making the finest, takes conviction.

And you can’t import the heart and soul of every man and woman working on the line. You can search the world over for the finer things, but you won’t find a match for the American road and the creatures that live on it.

Because we believe in the zoom and the roar and the thrust.

And when it’s made here, it’s made with the one thing you can’t import from anywhere else: American pride.

We will build your car.