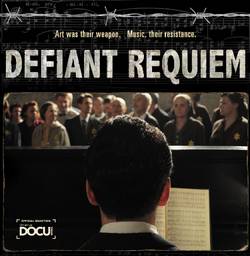 Schächter’s passion for putting on Verdi’s Requiem in the camp had everything to do with the Latin text, which, accompanied by the sublime music, he saw as being capable of making a defiant and inspiriting statement which the prisoners could not otherwise have publicly made. He made sure the singers knew the meaning of each word they sang, including these verses which speak of God’s judgment: END_OF_DOCUMENT_TOKEN_TO_BE_REPLACED

“Jesus Camp” is a film which has been nominated for an Academy Award, under “Best Documentary Feature.” It will be broadcast on the U.S. cable channel, A&E, on Sunday night. Linda Stasi in the New York Post reviews it, and says, “It’s not anti-Christian. But it’s definitely anti-fanatic.” There’s little question, however, what kind of message Ms. Stasi took from the film. END_OF_DOCUMENT_TOKEN_TO_BE_REPLACED