The CEO of EXXON said the following, as dead and dying oil-covered birds littered the Alaskan coast:

We would like to have no bird deaths and no bird injuries. But, once again, we have to balance all the needs of society. All the people who want to flip their switch and have electricity in their homes.

Except he didn’t, and neither did anyone else from the world of Big Oil. Those words were stated by Lorelei Oviatt, the “planning commissioner” of Kern County, California, where they are looking to greatly expand their reliance on wind farms, despite the already-heavy toll being exacted on endangered Golden Eagles and other birds of prey and migratory birds (to say nothing of all the less glamorous little birdies who must get whacked to death by the spinning turbine blades). Yet, the U.S. Fish and Wildlife Service, which can seek heavy fines and even jail time for the killing of endangered species, continues to give Green Eco-Friendly Power a complete pass. END_OF_DOCUMENT_TOKEN_TO_BE_REPLACED

A local TV station in Santa Barbara, California is reporting that a dog named Sydnee has been taught to count (up to ten and numbers in-between) by her owner, Maxine Davis. The dog barks the requested number of times and then receives a raisin as a reward. Hmmm. You can watch the video from KCOY-TV below. END_OF_DOCUMENT_TOKEN_TO_BE_REPLACED 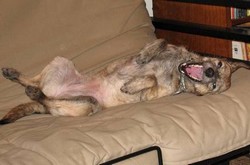 In Los Banos, California, last Saturday, a hunter waded into the water to retrieve his decoy ducks and almost found himself in Davy Jones’ Locker. (Well, alright: the bottom of a pond hardly qualifies as Davy Jones’ Locker, but I just love the expression and would like to see it return to common usage — or enter it for the first time — whether used appropriately or not.) The hunter had left his loaded shotgun on the ground, apparently, and his female Labrador stepped on it. The story (which I suppose only the hunter and the dog can fully vouch for) is that her stepping on it caused the safety to disengage and the shotgun to fire, hitting the man, who was about 45 feet away. END_OF_DOCUMENT_TOKEN_TO_BE_REPLACED