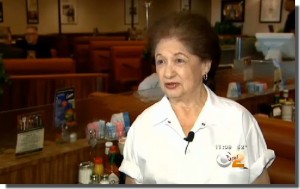 Bella Haig is eighty years of age, and has been a server at Canter’s Deli in Los Angeles for fifty of those years. Early last Friday morning, she reportedly received the largest tip of her career, $150, from the lead singer of rock band U2. She didn’t know who he was when he came in with some friends after U2’s performance nearby, but when she approached to take their orders he asked her to recommend an appetizer. As she told CBS LA: END_OF_DOCUMENT_TOKEN_TO_BE_REPLACED 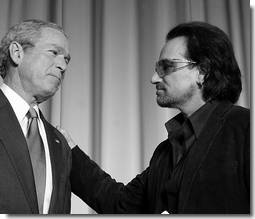 So, to spell it out, that which he’s saying is “true” is that Jews, Jesus and Muhammad are all descendants of Abraham. And this actually is true, as far as the Bible goes and as far as we know. And then in the succeeding lines Bono is pleading with Abraham to speak to his sons and tell them to stop fighting. END_OF_DOCUMENT_TOKEN_TO_BE_REPLACED

that was put out on Egyptian Records in 1996. If you happen to look for it on YouTube currently, you’ll see multiple instances where it’s been uploaded, but most of the people uploading and commenting on it seem to be under the impression that the song is actually a Bono or U2 original.

You can listen to the embedded version above (though you might want to avoid looking at the slideshow of images associated with it by this particular uploader). A lot of the YouTubers believe it’s one of Bono’s greatest songs, or even the greatest. It’s not that surprising they assume it’s an original, because Bono’s rendition is certainly far away from any blue yodeling connotations; his characteristically big, breathy vocal floats atop a bed of piano and rising strings. However, that the version works very well is beyond question. In fact, I think it’s total dynamite, and likely the most striking contribution to that album (which is itself very good). END_OF_DOCUMENT_TOKEN_TO_BE_REPLACED

Via BabyBlueOnline, this is an extract from the book Bono: In Conversation with Michka Assayas

in which Bono of U2 is responding to questions about his faith:

Assayas: That’s a great idea, no denying it. Such great hope is wonderful, even though it’s close to lunacy, in my view. Christ has his rank among the world’s great thinkers. But Son of God, isn’t that farfetched?

Bono: No, it’s not farfetched to me. Look, the secular response to the Christ story always goes like this: he was a great prophet, obviously a very interesting guy, had a lot to say along the lines of other great prophets, be they Elijah, Muhammad, Buddha, or Confucius. But actually Christ doesn’t allow you that. He doesn’t let you off that hook. Christ says: No. I’m not saying I’m a teacher, don’t call me teacher. I’m not saying I’m a prophet. I’m saying: “I’m the Messiah.” I’m saying: “I am God incarnate.” And people say: No, no, please, just be a prophet. A prophet, we can take. You’re a bit eccentric. We’ve had John the Baptist eating locusts and wild honey, we can handle that. But don’t mention the “M” word! Because, you know, we’re gonna have to crucify you. And he goes: No, no. I know you’re expecting me to come back with an army, and set you free from these creeps, but actually I am the Messiah. At this point, everyone starts staring at their shoes, and says: Oh, my God, he’s gonna keep saying this. So what you’re left with is: either Christ was who He said He was the Messiah or a complete nutcase. I mean, we’re talking nutcase on the level of Charles Manson. This man was like some of the people we’ve been talking about earlier. This man was strapping himself to a bomb, and had “King of the Jews” on his head, and, as they were putting him up on the Cross, was going: OK, martyrdom, here we go. Bring on the pain! I can take it. I’m not joking here. The idea that the entire course of civilization for over half of the globe could have its fate changed and turned upside-down by a nutcase, for me, that’s farfetched.

The same has been said in countless different ways (often times highfalutin) before, and but Bono’s blunt and pithy way of handling the question cuts right to the heart in admirable and refreshing fashion. Good on ya, Mister Vox.