Bob Dylan’s concert in Tel Aviv is scheduled for tomorrow night in Ramat Gan stadium. Today the Jerusalem Post has some quotes from two artists who are opening for Dylan: Asaf Avidan and Rickie Lee Jones. Both say nice things about Dylan and their anticipation of the show. (And, contrary to early reports, and just as I thought, Rickie Lee Jones is not scheduled to sing with Dylan and his band; although she indicates she’d be glad to do so if asked.) END_OF_DOCUMENT_TOKEN_TO_BE_REPLACED 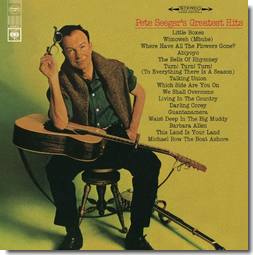 Pete Seeger was wrong on Adolf Hitler, wrong on Joseph Stalin (for over 60 years) and — yes! — wrong on Bob Dylan going electric at Newport. Yet, he gets cut a great deal of slack even by those who don’t share his ideology. He mentored a lot of individuals who later grew out of his party-playbook worldview (and you know what party I’m talking about). (Lest I be accused of innuendo: the Communist party.) He is given so much slack, and, in his old age, so many salutes and tributes even from those who have disagreed with him on substantive issues because he is seen to project a deep-seated concern for his fellow-man, even if that has sometimes led him to certain errors; errors along the lines of persistently shilling for a dictator responsible for the deaths of millions. Pete Seeger also has the ability to put over a folk song in a way that many find endearing. END_OF_DOCUMENT_TOKEN_TO_BE_REPLACED