The billboard is down, but the message has been sent, not least by all the attention given to the story in the media. 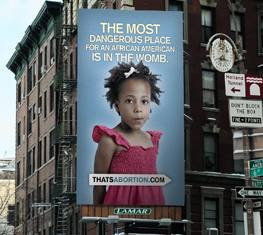 The anti-abortion organization, Life Always, bought the space on the billboard, which featured a picture of a young African-American girl, and the statement, “The most dangerous place for an African-American is in the womb.” The billboard was in the elite area of Manhattan known as SoHo, known for its expensive boutique stores, galleries and restaurants. A Planned Parenthood center is also nearby.

The statement on the billboard may have been in reference to recently-released figures which indicated that the rate of abortion amongst black women in New York is 59.8% (the overall rate amongst all pregnant women was more than 40%). Nationally, while African-Americans constitute about 13% of the U.S. population, they account for 30% of abortions in the country (Guttmacher Institute). The persistently high rates of abortion amongst black women in America has led some to characterize the phenomenon as a silent genocide. END_OF_DOCUMENT_TOKEN_TO_BE_REPLACED