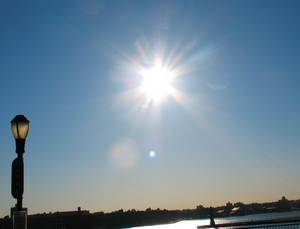 It used to be that mothers would tell their children, “Go out and play in the sunshine, it’s good for you.” In more recent years, saying something like that too loudly might have gotten a poor mom arrested and her children taken away from her. “The sun, good for you? Are you crazy? Are you trying to kill your kids with skin cancer?” At least, make sure the urchins are slathered all over in 45 SPF sunscreen, and preferably wearing hats and long sleeves. You might call this the Gospel of St. John the Dermatologist, and it has now been extremely well learned and internalized by a couple of generations of people in the United States and to varying degrees across what we call the developed world. And this much is now clear: it has been killing people.

A steady stream of studies over the past few years have been showing a dramatic correlation between low vitamin D levels in humans and a substantial increase in risk for a range of highly lethal cancers such as colo-rectal cancer and cancer of the breast. In addition, studies are showing that low levels of vitamin D appear to increase one’s susceptibility to a variety of other major killers, from heart disease to high blood pressure, obesity and diabetes. And, especially in older people, vitamin D has a massive influence on bone health and the prevention of fractures.

Vitamin D is most readily and efficiently obtained by exposure of one’s skin to sunlight, and the UVB rays which it contains, and which we have been taught to avoid like Superman should avoid kryptonite. A sunscreen with an SPF of 15 (laughably low by the standards of most caring, decent moms) filters out 99% of these UVB rays. So what kind of vitamin D levels does the average American even have these days? Well, yet another study, in news just out today, indicates that it is precious little indeed.

The study found that 70 percent of whites, 97 percent of blacks and 90 percent of Hispanics in the United States had less than 30 nanograms of vitamin D per milliliter of blood — the level considered adequate for health — during the years 2001 to 2004, based on data gathered by the U.S. National Center for Health Statistics.

Ginde and Keri Gans, a dietitian for the American Dietetic Association, suggested that people consult their own doctors, get their blood levels tested and consider taking supplements of 1,000 international units (IUs) a day of vitamin D.

I’m not smart enough to do the math (and as far as I know no one else has done it yet) but it should be possible some day to roughly calculate how many people have died sooner than they otherwise would have due to cancers and other conditions which were spurred by low vitamin D, which in turn was spurred by their obedience to the monotonous drone of dermatologists and TV medical experts over the course of decades, saying: “Wear sunscreen. Wear long sleeves. Wear a hat. Avoid being out in the sun between 10 a.m. and 2 p.m.” And on and on. There are those who take such health advice from the experts and run with it, and obey it in every respect. Those poor souls may as well have been living in caves, or like groundhogs, for all the sunshine that has actually touched their skin.

Who’d a thunk that sunshine was so good for you? Well, let me see … God, perhaps? Maybe that’s why He put our Earth in orbit around that big bright fusion reactor in the first place. Maybe that’s why we have the kind of skin we have and it’s not covered in layers of fur. Maybe, like good clean air and good clean water, good clean sunshine has to be good for you by definition because it is one of the fundamental and immutable facts of our environment. Even leaving the Good Lord aside, if you assume that we evolved to best survive and thrive in our environment, well, sunshine is an awfully big part of that environment. And when we were skipping carefree on the plains in our per-civilized state, we would have soaked up an awful lot of it. Biologically speaking, that’s yesterday.

Why would God have created us, or why would we have evolved, to be so vulnerable to premature death due to the very sun that sits in the sky? Why, on the other hand, wouldn’t it be reasonable to assume that our bodies would have developed in such a way as to depend on a steady supply of sunlight — since such a supply is almost unavoidable in natural conditions — just as we depend on air and water? Well, generations of mothers telling their children to go out and play in the sun (without reaching for a tube of gunk) assumed just that, until brilliant scientists declared otherwise and effectively told us to run for our lives away from that unwelcome big shining orb in the sky.

Consider the carnage that has been wrought.

None of this is to say that excessive exposure to sunlight isn’t a risk factor for skin cancer, or that skin cancer isn’t a bad thing if you happen to get it. But what excessive exposure actually is varies for each person, and the dangers of skin cancer have to be weighed against the dangers of comparatively more lethal and harder to diagnose cancers and other conditions, surely. Otherwise, one may as well argue that people should avoid drinking water for fear of accidentally drowning.

Vitamin D supplements are going to be recommended more and more, and supplements are bound to be better than nothing, but experience usually shows that the best way of getting the benefits of any vitamin is to obtain it naturally. Vitamin D occurs naturally in oily fish like salmon and sardines, but it’s said that two servings a day would be needed to obtain the healthy amount, and that seems highly ambitious for all but penguins. So the lesson I personally would take is: Eat your fish, by all means, and take supplements if you think it advisable, but get out in the sun more, sans sunscreen at least part of the time, and celebrate not feeling guilty anymore about soaking up some rays. Yes, it turns out there’s a reason why being out in the sun tends to make you feel good. It’s because it’s doing you good.

I’m no doctor (and consult your own before adopting any new health strategy based on what some nut on the internet says) but I foresee a time when the healthy amount of sun exposure for a human being to receive will be understood as being any amount that does not result in a sunburn. Which is kind of what our bodies and our commonsense would tell us anyway, isn’t it?

There is a deeper lesson in all this about the often arrogant and dangerous single-mindedness of the scientific and medical elite. Dermatologists decided that UVB rays were a risk factor for skin cancer, and therefore we as humans were instructed to fundamentally alter our relationship with the natural environment, by treating the sun as an enemy instead of as an inherently good thing. And we (or most of us) obeyed! The lesson is about how wrong so-called scientific consensus can be, and how easily and foolishly we are taken in. The death toll has to have been enormous. Of-course, all those people would have died anyway, and all of us are going to die anyway, someday. Still, trusting better instincts over the cold pronouncements of scientists, all of those now passed on due to conditions stemming from vitamin D deficiency might have been able to enjoy a few more sunny days on this earth. As we should too.

There may, as the Bible says, be nothing new under the sun. But just being under the sun, it seems, is something that can now be enjoyed anew.

5 thoughts on “Sun, vitamin D, cancer, and the vindication of common sense”