New York City, to those who love it, is very often beautiful, but only very rarely pretty.

There’s the strange beauty of an overcast day, with a low-hanging grayness shrouding the Empire State Building and the other clustered midtown skyscrapers. There’s the unique beauty of a subway car crammed with a motley herd of travelers — every race, creed, style of dress or undress, almost every economic class — sitting, standing, jostling, and (honestly more often than not) avoiding coming to blows. There’s the olfactory beauty of the varying and mixed up aromas of cooking that one encounters while charging down the street — the pizza places, the falafel stands, the donut shops and even the dirty-water hot dog carts (I don’t eat ’em anymore but I do like to smell ’em).

And on and on. There is so much that is beautiful in New York, albeit that for many people it demands a taste that must be acquired.

It is rare, however, that prettiness survives for any length of time in Gotham City, swallowed up as it is by forces far stronger.

An exception is that time (which began a couple of weeks ago) when the spring blossoms and tulips emerge from the green median strip that runs up Park Avenue, especially from about 72nd street to 96th street. (It is neighborhood associations rather than the City of New York which finances and maintains the trees and flowerbeds in this area.) 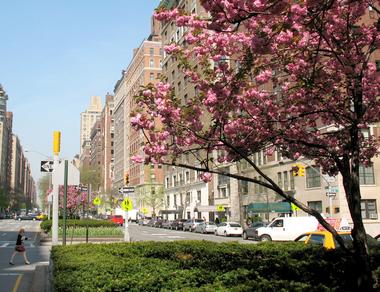 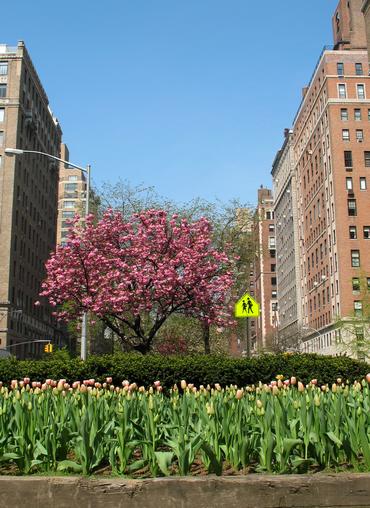 You often hear about the canyons of New York City, in between the tall buildings, and usually people are thinking of the Financial District when they use that term, but I happen to think that it applies best to this stretch of Park Avenue on the Upper East Side. On both sides of the avenue, you have these enormous and grand old apartment buildings — where, so we are told, the “old money” resides — mirroring each other with almost perfect symmetry, and overlooking the extra-wide avenue below, with its trees, flowers and grass, and the endlessly flowing streams and rapids formed by the cars and yellow taxis. Other avenues have the distractions of business, signage, crowds and delivery trucks, but Park Avenue here is zoned as residential only. It gives it a kind of stillness, and a stylized, controlled urbanity. It’s something. (Is all I’m saying.)

I gathered the photos and began writing the above some days ago, but didn’t finish it then. I was reminded of it by the screaming front page headline on the Drudge Report this evening:

There’s a link to a video someone captured on a cell phone, naturally.

Now, I like Matt Drudge and the excellent service he provides, but what made him think today that a naked man on the New York City subway was worthy of being elevated to world news? And what made him equate it with “TERROR”? I guarantee that most people on the train and subway platform in the vicinity of this man were reacting with little more than some dismay that this incident was going to make them late. No doubt the man has a worthy story of some kind, and certainly he deserves the helpful attention of professionals, family members, and so on. But, as the saying goes, there are eight million stories in the Naked City, and one has to draw the line somewhere.

The fine words of Cole Porter seem highly apropos to me right now: I happen to like New York.