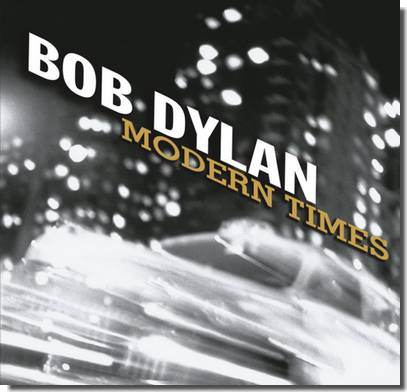 Regular readers of the writings in this space might not be unfamiliar with the suggestion that there is a way of listening to a great number of Bob Dylan songs — especially his work of the last couple of decades or so — such as to hear them as a kind of dialogue with Him who we can just call the LORD, ecumenically-speaking, and in the tradition of the Bible in English. My own appreciation of this originally came out of reading the deeply insightful writing, on Bob Dylan’s work, of Ronnie Keohane.

There’s plenty of this to be heard, should you be so inclined, on Dylan’s most recent LP, Modern Times. One example that could hardly escape even the most secular or agnostic of listeners is “Spirit on the Water”.

You don’t need a degree in Bible-ology to know that the first lines of this song reflect and reference the first few sentences of the Bible, and of the book of Genesis.

So, if you take the first verse of the song at face value, the singer is addressing this song to that very Spirit on the water. Taken in that way — as a love song to the Creator — it’s easy to see the meaning and poignancy of verses like this one:

There are so many ways in which people can forget the existence, and miss the presence, of the Creator. It’s almost as if there’s a conspiracy to make one forget, even if one happens to believe in the first place. Yet, the persistence of reminders (Then you turned up again) is arguably one of the greatest constants of all. The steady twinkling of a distant star, the sublime strokes of a masterpiece of art, the unasked for kindness of a stranger, the bells of some church in the distance, an inner knowledge that will not be quieted: Then you turned up again.

In certain of the verses of this song, a listener may also wonder if the perspective has changed, and if — instead of the singer addressing his Maker — what we hear is the Creator addressing his creatures:

You can go through all of the verses of the song in this way, and they resonate one way or another according to this theme.

There is one verse, however, that arguably sounds a jarring note. It doesn’t seem to make any kind of biblical sense or any kind of normal sense. That’s this one:

What’s that about? The singer saying to his God, “I wanna be with you in paradise,” is straightforward enough, we may think. But that he can’t go “back to paradise” because he “killed a man back there”? How is that? Is not the LORD a forgiving God? And how is it that the singer was in paradise before, and killed a man there at all?

Others may have found a way through it, but I never could figure it out. That’s why I’m hugely indebted to reader Kim for sending me the following in an e-mail:

I am probably just stating the obvious, but I will do so anyway: he can’t really just be talking about heaven [in this verse]. I’m thinking he’s also talking about Paradise, TX. Makes sense to me, anyway. What do you think?

Well, I think that it is a pretty brilliant perception, and one that certainly wasn’t obvious to this listener.

Paradise, Texas, had a population of 459 according to the 2000 census (and as reported by Wikipedia).

It is not, however, the only town or city called Paradise in the United States, as a long look at an atlas or another quick visit to Wikipedia would reveal. There are also the following:

There are also towns and cities called Paradise in New Zealand, Australia, Canada and England.

You might say that there’s a lot of people out there who really have their own little slice of heaven.

Who can tell to which town or city called Paradise the singer in this song might be referring, if indeed he is referring to a town or city? I don’t personally know how to pick one over the other. But just introducing the idea that it is an actual geographical real-world location to which he is referring changes everything, doesn’t it?

Consider: Bob Dylan loves citing place-names in his songs. We know this. Especially American place names, from Baton-Rouge to Corpus Christi to Boston-town and so many others. You could almost recreate a map of America from his songbook, if all other records were lost. And, for that matter, he also loves foreign place names, from Tangiers to Buenos-Aires to Gibraltar and beyond.

So how does it alter the sense of this verse if the singer is referring to a real town or city called Paradise? Assume, as we do here, that he is addressing the words to God. What the verse then becomes is a four line joke, a gag, a pun — and we also know how much Bob loves his puns — that is directed towards none other than the Creator Himself:

As befitting this sweet song of love, the singer says, and God hears, “I wanna be with you in paradise.” No problem there, God thinks. But then the singer goes on, “it seems so unfair,” because he can’t return to paradise, owing to the fact that he “killed a man back there.” He can’t go back to Paradise, the town, because he killed someone there, and now there are wanted posters on the walls, and a price on his head. (As Mrs. C. observes, it is like a vision from the Old American West, where you have to get of town to evade the sheriff and the crimes you committed in that particular locality. Places with great names like Tombstone.) The singer doesn’t provide us with these details, of-course. But then, after all, the song isn’t addressed to us. The singer is serenading the One who knows all those details already. God knows that this guy singing the song once killed a man in Paradise (Texas, Montana, Nevada — you name it). The joke, the gag, the pun, is on God Himself.

Making a joke to God is kind of audacious. And it can also be understood as a particularly intimate expression of love, can it not? It is only the most devoted who can joke to one another in this way, daringly making light of past transgressions.

Understood in this manner, the affectionate and playful nature of the song is asserting itself all the more in this previously confusing verse. Not every verse is without some mystery, of-course, even within this way of understanding the song, but that is as it should be. Every line doesn’t have to be nailed down and explained away. It is enough that there is nothing that is discordant or contradictory to this sense of the song, and that can be said, I think, if paradise is, after all, just Paradise (with a latitude and a longitude).