There has been considerable evidence accumulated through various studies that sitting for many hours each day—as so many people do as a matter of course at work, not to mention in recreational screen-watching—is extremely hazardous to one’s heath, especially when it comes to heart disease. A new report today has a cardiologist stating that it is every bit as dangerous as smoking.

“Smoking certainly is a major cardiovascular risk factor and sitting can be equivalent in many cases,” explained Dr. David Coven.

Dr. Coven is a cardiologist. He says several new studies show prolonged sitting is now being linked to increased risk of heart disease, obesity, diabetes, cancer, and even early death.

All the risk, without the stimulation of the nicotine, without the many pleasing rituals of smoking, and without the advantage of how dashing you look with a cigarette in your hand. Actually, I can easily believe that sitting for eight hours a day is likely considerably more detrimental—for most people—than a few cigarettes a day. Predispositions to particular health problems would enter into it. But what do I know? 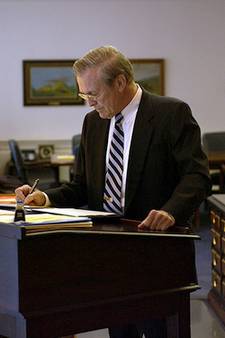 Someone who did know, apparently, and before most others, was former Secretary of Defense Donald Rumsfeld. During his years in the Bush administration (and perhaps before), he used a stand-up desk/workstation, and he worked long days. In his recent memoir

this is something which he does not crow about, but he does mention it, because it comes up in relation to “enhanced interrogation techniques” and the like.

Rumsfeld was at one point reviewing some recommendations from lower down on the chain regarding various techniques that could be used in interrogating captured terrorists, and he writes about it thusly:

At the bottom of the Haynes memo I scrawled a note that referred to the Category II technique that could require a detainee under certain circumstances to stand for four hours while interrogators questioned him.

“However, I stand for 8 – 10 hours a day,” I wrote. “Why is standing limited to 4 hours?” My offhand comment was a statement of fact. I used a stand-up desk and spent much of the day on my feet. The note received enormous attention when detainee abuse became a major public issue. It was a mistake to make that personal observation to my general counsel. It certainly was not a signal to the Department that it would be okay to stretch the rules, as some have suggested.

So, if your employer fails to provide you with a stand-up workstation, is that employer responsible for your diabetes, your obesity, your heart attack and your early death? (Forget second-hand smoke; it’s like forcing you to smoke a pack or two a day all by yourself!)

On the other hand, if your employer takes away your current comfy chair and desk and substitutes a stand-up workstation, is that employer in fact guilty of torture?

The cool thing is that, either way, the lawyers win.