Who knew so many Manhattanites even owned American flags? (When it comes to posters or t-shirts of Che Guevara, no number would surprise me.) In the aftermath of the attack on September 11th, 2001, the stars and stripes were unfurled everywhere, and they stayed put for a long, long time. From huge displays on commercial edifices, pristine and beautiful flags on luxury doorman buildings, soon-to-fade paper facsimiles in apartment windows, to the flags that roared in the wind behind every fire truck that screamed by.

Days after the event, I took this photo of a tiny flag on a nondescript doorway on the Bowery. 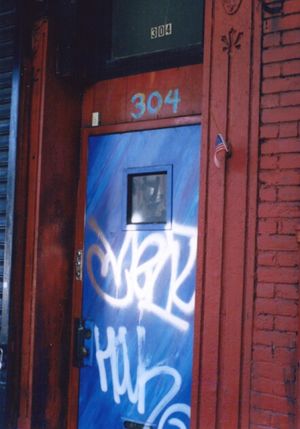 On that Tuesday in the late summer of 2001, a young man, newly arrived in New York City, witnessed the events from the streets nearby the World Trade Center. He became a volunteer on the pile of wreckage and ruin. As an editorial assistant for the magazine First Things, he went on to write a piece on some of what he witnessed and experienced on the scene. He wrote it while the recovery was still ongoing, before the final casualty figure was known. The same young man, Vincent Druding, was ordained as a Roman Catholic priest earlier this year. The piece he wrote then is republished at the First Things website this morning: Ground Zero: A Journal.