He was 79 years old when he received the (very first) “Neglected Masters Award” from the Poetry Foundation and Poetry Magazine. His “Selected Poems,” edited by Christopher Ricks, was then published by the Library of America. (I wrote on that book previously at this link.)

He was born in New York City and it was in New York City that he died. Until about a year ago he inhabited the same small railroad apartment in New York’s Greenwich Village in which he had lived since the 1950s; it is a space which itself inhabits his poetry.

I rate it as a blessing beyond comprehension that this writer was able to make his acquaintance in a very small way. He was a warm and friendly man who loved to talk to those who were receptive about the use of words, about the use of the word: about what he himself did so very well. 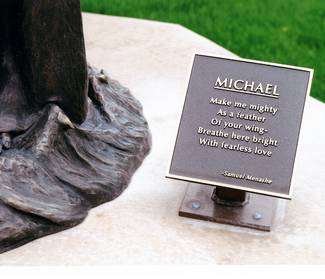 He was Jewish and proudly so, but that did not prevent him from being highly pleased that the Catholic Archdiocese of Denver chose one of his poems to stand beside a statue of Saint Michael the Archangel. (Pictured below.) 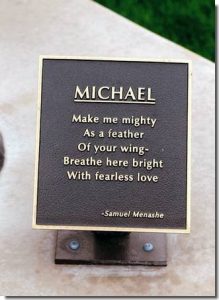 The profound religiosity and intensity of Menashe’s poems make some of them notably valuable as prayers, if the reader happens to be a believer. And it has struck me that these qualities in addition to their brevity and concision can make them particularly appealing as prayers before meals. One such I like very much is this one:

‘And He afflicted thee and suffered thee to hunger and fed thee with manna, which thou knewest not neither did thy fathers know, that He might make thee know that man does not live by bread alone, but by every word that proceeds from the mouth of the Lord does man live.’
—Deuteronomy VIII:3

To Samuel, who labored so long and nobly that we might have more than only bread to sustain us: rest in peace.