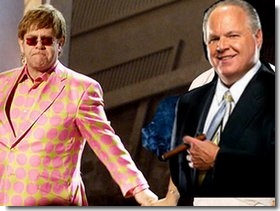 Sunday morning, a source tells PEOPLE, the newlyweds hopped Limbaugh’s private Gulfstream jet for a honeymoon in Mexico, Africa and a couple other spots.

This is the fourth marriage for AM radio giant Limbaugh; pop-music titan Elton John has been married once before (to Renate Blauel in the 1980s) and has been in a civil partnership with David Furnish since 2005.

Through his spokesman, Rush Limbaugh said, “Even with half my brain tied behind my back, I could see that Elton was the one I’ve been waiting for all my life. Since we met, I’ve been having more fun than a human being should be allowed to have.”

And Elton John issued this statement: “From the first moment I saw him, I realized that Rush Limbaugh was a compassionate, super-intelligent gay man who understood human problems. And I want him to be my acrobat.”

OK: that’s not exactly what happened on June 5th, 2010, although, going by the consternation in various circles, you could certainly think so. In fact, Rush Limbaugh married a woman named Kathryn Rogers. Elton John played music at their reception. Some on the Left have attacked Elton for playing at the wedding of a supposedly bigoted, racist, “homophobic” right wing firebrand. Some — although notably far fewer — on the Right have questioned why the conservative Limbaugh would invite the openly gay and outspoken Elton John to perform at his nuptials.

I’m one of those who actually likes both of these guys, so maybe I can suggest why they are not really as oily and watery as some would think, even if their political positions would be dramatically dissonant.

Joy Behar of the ABC TV show “The View” (as quoted by Deroy Murdock), reacted to the news of Elton playing for Rush Limbaugh and his bride thusly: “I wonder if it would be OK with everybody if Elton or somebody had gone down to perform during apartheid South Africa, you know, or the Ku Klux Klan, if they had a lot of money.”

Behar is obviously joyfully unaware of the fact that Elton John did perform in South Africa before the end of the era of apartheid. He played in Sun City (albeit to non-segregated audiences) and insisted in the face of loud opposition that he would play wherever he wanted to play. (He was also perhaps the first major Western pop musician to play behind the Iron Curtain, in 1979.) So Elton has never exactly been beholden to political correctness. He is undoubtedly an opinionated fellow, and perhaps Bernie Taupin’s lyric The Bitch is Back said all that needs to be said on that front about thirty-five years ago. Elton also seems to see the purpose of music as being to bring people together, rather than to be used as a kind of weapon by being withheld from undeserving people.

As for Rush Limbaugh, he’s never pretended to be the kind of conservative that, say, Bill Bennett is. Limbaugh doesn’t constantly invoke high-minded notions of morality and ethics in his arguments, and neither does he present himself personally as any sort of saint. He touts conservatism (and in particular Reagan conservatism) as the most effective philosophy to benefit and inspire Americans and people in general. He’s an economic and personal-freedom-oriented conservative. He is pro-life and is socially conservative in broad terms, and believes in God, but doesn’t beat those drums in particular, preferring to speak from a pragmatic perspective: Conservatism works; liberalism doesn’t. To be sure, he makes fun of the mannerisms of certain liberal gay members of congress, but he makes fun of the mannerisms of anyone who comes into his target zone by virtue of being liberal, whether that’s John Kerry, Jesse Jackson, Bill Clinton or Barack Obama. He’s most certainly not politically correct.

So, their shunning of political correctness and the strictures of others in general is a tendency that Rush and Elton have in common. They would also have in common a passion for perfection in what they do. Other than that, of-course, they couldn’t talk about politics for ten seconds without disagreeing with one another. But that wasn’t relevant to what took place in Palm Beach on June 5th. A man and a woman were getting married. They could afford the best and wanted Elton John to play at their reception. He accepted the gig and played for them, and by all accounts everyone had a great time. There’s nothing else to be said, except that it’s refreshing to see at least one occasion on which political differences could be kept in their box and goodwill could be permitted to reign.