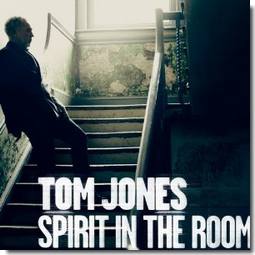 There’s a certain kind of courage involved for a vocalist in tackling new material—material which has hardly been touched by other vocalists—and it’s on display here, albeit that the casual listener might not necessarily pick up on it. Since Dylan and the Beatles, the notion of “authenticity” has been very weighty in the sphere of popular music, and it’s inherently challenging for a singer to take on a song that has already been sung by those that have composed it. Tom Jones here, in collaboration with his producer Ethan Johns, shows no fear, but sings songs that have been recorded both very recently and quite brilliantly by the respective composers. That he pulls it off in each case without sounding ridiculous is no small achievement. And he generally does much better than that.

“Love and Blessings” is a Paul Simon song from his most recent album. Tom Jones’ rendition substitutes a guitar riff for the “bop-bop-a-whoa” part of the lyric, which is (what?) maybe Paul Simon’s shorthand for that which drives human nature: a sense of carnality perhaps mixed with a yearning for the sublime. Anyhow, using a guitar riff suits Tom Jones’ somewhat more muscular and soulful reading of the song.

The arrangements on the album are in general spare but at the same time creative. Space is treated as a thing not to be feared, but to be exploited.

As a big Bob Dylan fan myself, I loved Tom Jones’ version of “What Good Am I?” from his previous album, Praise and Blame. On this album he tackles “When the Deal Goes Down.” It is one of the great Dylan songs of very recent years, and his own version is superb, with one of the most-wonderfully delicate and nuanced vocal performances Bob Dylan has ever put on record. The arrangement here takes the suggestion of the kind of circular carnival-like melody and goes all the way with it, with a sound like and old-timey circus organ. Tom Jones sings it with all his usual feeling. It’s not the stunner “What Good Am I?” was (since Jones’ cover, Dylan himself has returned the tune to his setlists) but the song deserves this and many more treatments by great singers.

Jones also here covers “Lone Pilgrim,” which is not a Bob Dylan song, but an old one which Dylan brought back to currency when he recorded it in the early 1990s. Dylan wrote of the song then that what attracted him to it was “how the lunacy of trying to fool the self is set aside at some given point.” I’m guessing Tom knows what he meant; it’s a gentle and lovely rendition in any case.

Tom Waits’ “Bad As Me,” from his most recent album, is given a workout here, and although it’s fun I think it also marks a case where there is not enough of a personal angle on the tune. Bluntly, it sounds too much like Tom Waits; one can almost hear Marc Ribot on guitar, and Tom Jones has some uncharacteristic gravel in his voice.

A much older song which Tom Jones utterly nails is Blind Willie Johnson’s “Soul of a Man.” The performance builds and builds till it’s just white-hot—a masterful take. “Traveling Shoes” is credited as an Ethan Johns/Tom Jones original; the lyrics are a take on an old gospel-song-motif about being ready to meet one’s Maker. Briefly put, it’s explosive, another highlight.

And there are many other fine tracks including Jones’ versions of Odetta’s “Hit or Miss,” Richard Thompson’s “Dimming of the Day” and a little-known Paul McCartney tune called “(I Want to) Come Home.” Just as I said earlier, I think any day would be a nice one to hear an album with both the quality and spirit of this one; it’s treat after treat.

I would have to say that on hearing the whole album, however, the track that struck me as deeply as “Tower of Song” did on first hearing was “Charlie Darwin,” a song by the indie-folkie group called “The Low Anthem,” from their 2009 album. It qualifies as an amazing song; one could possibly write a whole book exploring the feelings it mysteriously evokes, but in the end it’s better just to listen to it and feel those feelings. Their original version is certainly poignant and heartbreaking enough to stand as definitive. Yet, the selection of it here by Tom Jones to cover is an inspired one. It’s an unusual song for Jones, in that it has no easily definable narrative—in plain language it is out there—but his singing of it brings it a little closer to earth, making it both more accessible and intimate. And then the addition of the early-music vocal ensemble Stile Antico is also inspired, gently situating the tune on the heavenly level from which it seems to inherently emanate. It’s a stunner.

It seems as if Tom Jones might be working overtime on acquiring those “Traveling Shoes” he’s singing about. One thing is for sure, if you ask me: it’s only to the benefit of fans of great popular music.

Rating: Nine and a half out of 10 lead pipes.