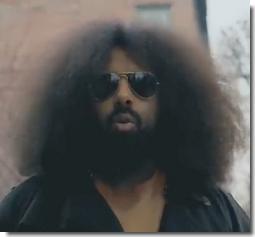 Speaking of Reggie Watts (“Bob Dylan in the 80s”), he recently put out a new song titled “Get Ready.” From someone who comes up with a lot of highly-charged improvised music in his comedy performances, this track plays it straight, and to these ears it’s just an extremely listenable and groovy piece of old-school pop and soul.

Watts fairly overflows with musical talent, as displayed in those spontaneous bits in his stand-up routines. So it’s nice to hear him catch some of it in a bottle and pour it into a record as unpretentious and sweet as “Get Ready.”

The video that accompanies it, unlike the song, is actually comedic in nature, right down to a final punchline, and is embedded below.

For anyone who’s never seen Reggie Watts’ comedy, there’s naturally lots of things out there on YouTube (including on his own channel), but to yours truly none greater than the bit embedded below, from a 2012 Technology, Entertainment, Design (TED) conference, which also has the advantage of being safe for work (that is, if spending your time watching YouTube videos is ever safe for work). It’s nine and a half minutes in which Reggie brilliantly sends up … well, everything. (Including his audience.)