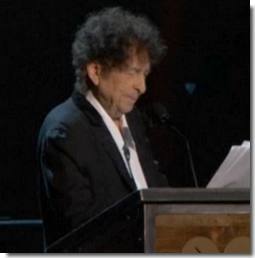 In his speech last Friday night, accepting the “Person of the Year” award from MusiCares, Bob Dylan remembered many old gratitudes, for such as John Hammond, the Staple Singers, Joan Baez, Lou Levy, Johnny Cash, and others, and then he also used the occasion to take issue with many of the tropes that music critics have employed when writing about him. And he also took a couple of knocks at some individuals in the music business who he believes disdained his songs many years ago, contrasting those individuals with others who said nice things about his music. People have been reacting different ways to his speech, some focusing on the gratitudes, some focusing on the knocks, some seeing a lot of humor in it all, and some hitting back at Dylan for being petty or cranky. I think one issue is that people have been reading the speech (full transcript here) and of-course Bob wrote it to be delivered—which is a different kind of writing—and there are laugh lines and so forth which temper the crankiness quite a bit. I haven’t seen much video of the speech as yet, but for some reason this Belgian website has a fairly good series of short clips spliced together that do go a long way towards conveying the tone of the delivery. Bob was having a good time.

One person who got knocked by Bob was Merle Haggard—rather surprisingly since Dylan had him as an opening act on a tour a few years back. Yet, Dylan asserted that he knew Haggard didn’t really like his songs; but on the other hand, Buck Owens did like them, and Dylan indicated that he was quite happy to have Buck’s approval over Merle’s.

Merle Haggard responded pretty quickly, and being the 21st century man that he is, it was on Twitter.

Bob Dylan I’ve admired your songs since 1964. “Don’t Think Twice” Bob, Willie and I just recorded it on our new album.

So he asserts that he’s liked Dylan’s songs since 1964. Of-course, this leaves him open for a rather obvious retort: “What about 1963, Merle? What did you think then? Freewheelin’ didn’t do it for you, huh?”

Beware Bob’s long memory. Or maybe there’s something going on here that we just don’t know about.

In any case, surely Bob was having fun, while at the same time letting off steam over things that have irritated him over the years. He has a whole lot to be grateful for, of-course, a remarkably long and remarkably successful career (he has the number one album this week in the U.K. with Shadows In The Night). And this may make people wonder why he’s taking the time to complain—even in a humorous way—about anything at all. But I don’t think he feels that he made it this far thanks to the critics, so many of whom tried to pigeonhole him and stifle him and knock him for going in the wrong direction over and over again, but rather that he did it in spite of the critics.

A harsh word can be deeply felt by a creative type, and can sometimes just stop them dead in their tracks. And a kind word at the right moment can be of enormous value and an incredible source of inspiration. Dylan never let himself be stopped, but neither apparently has he forgotten anyone who took an opportunity to discourage him.

When, in the recent AARP interview, Dylan’s asked if he thinks it’s risky to record these songs that Sinatra fans love to hear sung by Frank, he responds with a healthy philosophical perspective:

Risky? Like walking across a field laced with land mines? Or working in a poison gas factory? There’s nothing risky about making records.

Little risk to life and limb, indeed. But criticisms are felt, obviously, and Dylan took a golden opportunity to hand some of them back, and he certainly made a lot of people laugh at the same time too.

Having only read the speech on paper as-it-were, it does seem to me that the climax is intended to be where he talks about what might be a future project: a gospel album with the Blackwood Brothers. (Then he goes on to end appropriately by thanking MusiCares for their good work, using the example of his friend Billy Lee Riley.) In what I think is also an example of gratitude, and a rather deep gratitude, he reads out the lyrics of a song he’d like to do with the Blackwood Brothers, namely “Stand By Me” (the gospel song, not the Leiber & Stoller song):

Will he actually make an album with the Blackwood Brothers*? I think it would be a blast, but I confess to being skeptical, only because whenever Dylan speaks publicly about some future project it never seems to happen … or else it takes twenty years, and I’m not sure Bob has that kind of time (despite who he may have standing by him).

The Blackwood Brothers are a gospel quartet formed in 1934, and boy do they look good (video clip below) considering they’ve all got to be centenarians or older by now. It just goes to show what clean living can do for you! 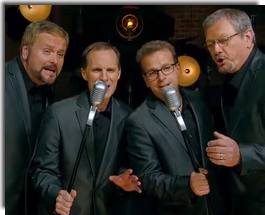 Alright—it’s not actually the original foursome anymore. There’s just one Blackwood now, Billy, the youngest son of one of the original four, James (who died in 2002). And then there’s Wayne Little, Butch Owens and Michael Helwig.

*[UPDATE: According to a report in Rolling Stone, Dylan apparently misspoke, and was not referring to the Blackwood Brothers Quartet but rather the plain Blackwood Quartet, a distinct group formed by another member of the same family, Mark Blackwood, in 2012. They mine a similar vein of music. Sorry. Such a complicated world we live in.]

Dylan says that doing an album with the Blackwoods might “confound expectations”—a phrase he’d mocked as used repeatedly by critics regarding his music—but he says: “it shouldn’t. Of course it would be a gospel album. I don’t think it would be anything out of the ordinary for me. Not a bit.”

Musically, it would certainly feel different to the kinds of gospel he’s done before, but that’s also what would make it fun.