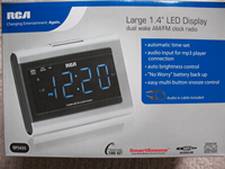 I purchased the RCA RP5435 AM/FM Clock Radio with an extra-large 1.4-inch display yesterday. And yes, I did it because (without my glasses on) I am virtually blind, at least when it comes to objects at a distance. I did not buy this clock radio for the various sexy selling points described on the box, such as the automatic time-set (which just means it’s preset at the factory, by the way), or the audio input for an mp3 player (I like waking up to the news headlines; I guess getting angry and disgusted helps me get out of bed), or the “programmable snooze & sleep” (I can’t imagine a single circumstance where I’d want to use that). I bought it because I wanted a clock radio with big numbers that I could easily see when I wake up in the middle of the night.

The thing is, if you wake up in the middle of the night and have to really strain your eyes or move some distance to read the clock (let alone put your glasses on), then it’s that much less likely you’re going to get back to sleep with any ease. Yet, the one thing I most want to know when I stir at night is: “What time is it? How many more hours do I have left to sleep?” I’m certain that I am far from alone in this. It’s such a heavenly pleasure to discover that you still have most of the night ahead, especially if you feel that you’ve already been sleeping a long time. It is of-course highly demoralizing to discover that only about an hour remains, especially if you feel totally wrecked. But these things must be faced, and the desire to face them is evidence of the deep and unalterable human yearning for truth.

I also bought it because it was relatively cheap at $19.99. There were cheaper clock radios available, but not with such nice big numbers.

I was under the impression that the basic technology of a clock radio was pretty much sewn up a long time ago. I’ve known clock radios that were thirty years-old (and looked it) and still functioned without a hitch. I bet we can say we’ve all known such clock radios: stalwart servants, homely yet reliable, sitting on bedside tables in the homes of elderly relatives, with the dust of decades resting in their speaker-grilles. Yet, if you’re staying overnight, and so long as you can figure out how to set the damn alarm (never a given, certainly), the one thing you can count on is that you will hear that clock radio’s faithful blare in the morning, and it will prompt your desperate flailing lunge to shut it off before it wakes up the whole household. Mission accomplished: you are up.

So it was with a high degree of confidence that I bought and brought home this RCA clock radio with the 1.4 inch display. What could go wrong?

Batteries were already installed, preserving (according to the instructions) the accurate factory-preset time. All I needed to do was press a button on the back to adjust the timezone setting to match my own timezone. So, I took it out of the box, looking forward to many decades ahead filled with nights in which I could easily glance at the glowing numbers and fall right back to sleep. I plugged it in. 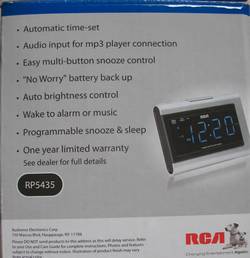 I am obliged to confess that I have not checked the other features of this RCA clock radio, like the mp3 audio input or the “programmable snooze & sleep.” I am in many ways a simple man, and it is difficult for me to put aside the fact that this clock will not display any time other than 0:08. No doubt if I could put this fact aside I could enjoy many fine moments with this, well, differently-abled clock radio.

As it is though, I feel I have no choice but to return the RCA RP5435 AM/FM Clock Radio as defective. I will not exchange it for another RCA clock radio, but will instead continue and expand my search for one which has big numbers and which employs those numbers (all four of them, I hope) to declare the actual time.

My experience with this RCA model may well be anomalous. I can’t say. But on the good old “fool me once” principle, I will be looking to a different manufacturer to satisfy my clock radio needs.