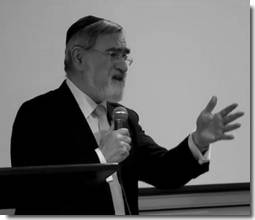 Rabbi Jonathan Sacks—who recently moved on from his post of Chief Rabbi of Great Britain, which he occupied for 22 years—gave the Erasmus Lecture in New York City last Monday night, an annual event sponsored by the journal First Things. Yours truly was fortunate enough to attend, and judging by the energy and passion of Rabbi Sacks’ talk, he is not interested in fading away, but looks rather likely to relish his new freedom and devote it to advocating for the value of faith in the contemporary world. The title of his lecture was “On Creative Minorities,” which would seem to be a yawn-inducing topic before you even get to the fourth or fifth syllable, but turned out to be quite the opposite: it seemed very timely, even urgent, and it was delivered with a spirit, erudition and humor that earned the rabbi a number of standing ovations from the religiously-mixed audience (Catholics, Jews, Protestants, intellectuals, and the usual motley band of dilettantes to which I subscribe).

The term creative minorities has a quite specific origin, but Sacks structured his lecture to introduce that source later, the better to begin, I suppose, with a broader sense of what a creative minority might be. So he began 2600 years ago, with a letter from the prophet Jeremiah to the exiles in Babylon, including these verses from Jeremiah 29:

Build houses and live in them; plant gardens and eat their produce. Take wives and have sons and daughters; take wives for your sons, and give your daughters in marriage, that they may bear sons and daughters; multiply there, and do not decrease. But seek the welfare of the city where I have sent you into exile, and pray to the Lord on its behalf, for in its welfare you will find your welfare.

Sacks pointed out that in contrast to Jeremiah’s reputation as a prophet of gloom or doom, he was fundamentally a prophet of hope. And in the lines above Jeremiah is (while speaking for the LORD) giving a hopeful prescription to the exiles from Israel who were a small minority in Babylon: live, increase, pray for that place in which you live, and seek its welfare. Sacks later recommended a similar role for public religious intellectuals today; that is as prophets of hope rather than doom.

The term creative minority actually originated with the British historian Arnold J. Toynbee, and was key to his twelve-volume A Study of History, which Sacks says he made himself read in preparation for this lecture. Toynbee postulated that civilizations arise when a people faces a challenge, which is solved by a creative minority amongst them who then guide the nascent civilization to growth and, if successful, to the level of a “universal state” (or, as Sacks also put it, an “empire”), before the creative minority degenerates into merely a “dominant minority” which is eventually destroyed by both internal and external foes, resulting in the end of that particular civilization. Toynbee was specifically dismissive of the notion of any Jewish civilization worth the name, referring to the Jewish community as “a fossil” in the first volume of his history, published in 1934. And Sacks also recollected that Toynbee, in 1954—a mere nine years after the closing of the death camps—explicitly compared the young State of Israel to Nazi Germany.

Pope Benedict XVI, speaking in recent years of the future of the Catholic Church in post-Christian Europe, also used the term creative minority, in the sense of it being something the Church should see itself as in the current era. Rabbi Sacks didn’t take issue with this, but did opine that believers would be better to seek to be the kind of creative minority that the Israelites were exhorted by Jeremiah to be, versus the kind envisioned by Arnold Toynbee; that is, I think, that it would be better to be a minority that contributes to and hopes for the welfare of society rather than one that seeks dominance and expansion.

Sacks also laid out the nature of the challenges that both Jews and Christians face in the contemporary world, using stark numbers. In multiple nations of Europe, increasingly large percentages of Jews are fearful to even be recognized as Jews in public, with anti-Semitism rising yet again, as he said, “within living memory of the Holocaust.” And in multiple nations of the Middle East, Africa and elsewhere, being a Christian is simply becoming a growing drag on one’s life expectancy (my phrase), and the violence directed against them is driving Christians out of entire nations and regions—what Sacks called a religious form of “ethnic cleansing.” He cited a number of recent horrific events and massacres which the world-at-large seems to greet with silence. And he noted that, in the present day, Israel is actually the only nation in the Middle East where it can be considered safe to be a Christian believer, and where the Christian population (albeit small) is actually increasing instead of shrinking.

Simultaneously, in the West, there is a sustained and broad attack on Judeo-Christian beliefs and values in the media and in the political world and in general. Sacks declared it would be crucial for Jews and Christians to together present an alternative to the materialism and emptiness that seems to be overtaking Western society, and to offer hope and charity to the society as a whole regardless of belief or non-belief.

So, that would be my own personal, pitiable and highly incomplete summary of Rabbi Sacks’ lecture (which was being videotaped and so hopefully might appear somewhere soon). One thing I definitely have failed to convey is how engaging he was, and how well received by the audience of various faiths.

After the lecture I had a little flash of what passes for a realization in my brain; that is, a new thought or a putting-together-of-things that was at least new to me, although it may well be very old hat to serious students of the subject matter. Nevertheless, it is significant to me, and I’d like to put it into words, so I hope you will tolerate its inclusion as a kind of postscript here (it seems in any case that there is no one who can stop me).

Yours truly has almost always had an interest in the religious relationship between Christians and Jews, even before possessing any proper knowledge or language to talk about it. I guess it just seemed to be something that must greatly matter to God, given, you know, the Bible and everything. So, I’ve paid attention, soaked up certain things, had certain mistaken perceptions corrected along the way, and continued soaking up things.

The late Richard John Neuhaus was an enormous influence on many in thinking through matters of faith, and he himself was a significant figure in the Christian/Jewish religious dialogue in the United States (and therefore, I suppose, since the issue really has no borders, everywhere). Writing once on the subject, and in one particular passage on the uniqueness of America as a safe venue for an unprecedented level of Christian/Jewish dialogue, he quoted Isaiah 43:19: “Behold, I am doing a new thing; now it springs forth, do you not perceive it?” The verse evokes very well the inscrutable mystery of how God’s will unfolds through history even while we blindly stand around wondering why we cannot see God’s hand.

I recently read John M. Oesterriecher’s The New Encounter Between Christians and Jews, which among other things is an insider’s account of how the pivotal Roman Catholic Declaration on the Jews came to be written and agreed upon during the Vatican II process in the 1960s. It certainly gives the reader who was not around then a very clear sense of the drama and import of what took place, and the great shift that it constituted.

I could go on trying to give context to the realization that popped in my brain the other night, but I’m out of my league in all of this, so I’ll just cut to the chase: What occurred to me is that for a couple of millenia the vast majority of Christians (or at least those who cared) believed that the issue of Christian/Jewish relations would be dealt with when all Jews came to believe in Jesus just as Christians did; yet, in the era in which we happen to be blessed to live, where there has finally been significant movement towards mutual understanding, it has not been due to a trend in that direction at all. It has instead been due to this long-delayed (even if far from universal) movement by Christians towards a better understanding of their faith’s Hebrew roots. Pope John Paul II’s phrase, “our elder brothers in faith,” seems so entirely the correct footing on which the relationship should rest and ought to have rested, yet it has been so long in getting here, and the price paid by Jews through history for maintaining their faith and surviving as a living testament of God’s own faithfulness has been so high. But delayed or not, it is a new thing, and in it it is surely possible that we see the hand of God bringing His will to fruition in a way that was not expected. And the mystery of God’s timing and man’s readiness is something that Abraham Joshua Heschel has helped me to better grasp.

There is so very much that Christians can learn from the great Jewish tradition, like a vast mountain of beauty available to be freely explored, all but unseen for so long. And I think that a subtext of the talk by Rabbi Jonathan Sacks, also discussed in the Q & A period afterwards, is the question of how Christians can both keep their faith and bear witness to God in a future that it is not impossible to view as being very bleak. And that means, I think, not just next month or next year, but, if necessary, for a thousand years and more. There can be no question but that Judaism has lived those lessons already. For his part, Rabbi Sacks averred that there are lessons that Jews can learn from Christians too, in terms of being more outward-looking and outward-reaching.

I suspect that just possibly the above is not the last word that will be said on these various subjects, but it is where I end.

Addendum: The video of Rabbi Sacks’ talk is now available via First Things, and embedded below.