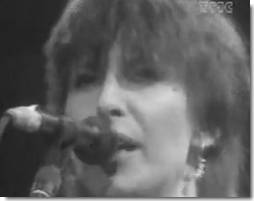 I don’t know exactly when this performance by Chrissie Hynde of Bob Dylan’s song “Property Of Jesus” took place, but it’s embedded via YouTube at the bottom.

I’d heard reference before to Chrissie Hynde singing this song, and was curious about it, but I hadn’t actually heard it until I came across this clip the other day. The rendition is word perfect and tightly-performed, so it’s clearly not a casual or one-off thing. Musically, Bob Dylan’s original on Shot of Love

from 1981 is pretty much straight-ahead rock & roll, but Chrissie Hynde and her band turn it into a kind of shuffle, and a pretty groovy one at that.

Shot of Love is regarded by the arbiters of truth in the rock music world as being the third of Bob Dylan’s three gospel albums. And if you indeed look at those albums as a trilogy, then I think you would have to say that Slow Train Coming is filled with the excitement and radical newness of Bob’s religious conversion. Saved is then a kind of coming-to-terms with a great gospel tradition, in particular the black gospel tradition in America. Both the musical and lyrical motifs are tried and true (no less the profound for that) and Dylan is inserting only a minimum of his own idiosyncrasy into the mix.

Shot of Love follows as Dylan coming back to Earth, dealing with the world as it is, and speaking his own language, but through a changed lens. A number of the songs are not remotely “gospel” in nature (“Lenny Bruce,” “Heart of Mine,” “Trouble”) and those that are concerned with matters of faith reflect a struggle to reconcile belief and loyalty to God with the difficulty of getting through the day-to-day turmoil of life. And on “Property of Jesus,” he is just plain mad.

There’s a tangible and cathartic release in this song. Dylan’s ironic embrace of sarcasm and and sneering against those who commonly sneer at people of faith is, in its way, exuberant and liberating. It is “Like A Rolling Stone” for an entirely different context, puncturing different hypocrisies and exposing different vacuities. (Although, arguably, all hypocrisies and vacuities could boil down to the same kind of thing.)

Not very many people have picked up on this song and its particular strengths, no doubt put off by its context on Bob Dylan’s “third gospel album” and by the word “Jesus” in its title. Chrissie Hynde, not known as any kind of evangelical performer, obviously got something from the song, and didn’t merely deliver a pro forma copy of it, but re-translated it musically into something that suited her own talents.

Hats off to her for that.