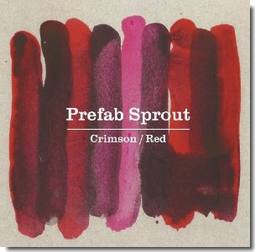 Crimson/Red—the first 100% new album under the moniker of Prefab Sprout since 2001’s The Gunman & Other Stories—is a remarkable record, if less than perfect. It is remarkable first for its very best tracks, a great song always being a remarkable phenomenon, and not something we have any right to expect will simply spring into being on a regular basis. The album Crimson/Red is remarkable secondly for its genesis, as Paddy McAloon (the singer and songwriter of Prefab Sprout) has faced a variety of challenges over the last decade in recording and releasing new music. However, he has not been completely inactive.

Out of a condition of temporary blindness caused by detached retinas came the inspiration for I Trawl the Megahertz, the one official Paddy McAloon “solo” album to date, built around the title track, a twenty-two minute instrumental and spoken word piece. The album is a both sophisticated and soulful work and was finished and released in 2003.

In 2006 the classic 1985 Prefab Sprout album, Steve McQueen, was remastered and McAloon was prevailed upon to record some acoustic reinterpretations of the material to package with it. Instead of one man and his guitar, however, it turned out to be one man and his multilayered guitars and vocals, and is quite a stunning work itself. Soon after this McAloon was afflicted by severe tinnitus (noises in the ear) which not only made music impossible for some time but reportedly all but drove him around the bend. To this day he can’t risk playing with a live band, being obliged to carefully control the volume of the music he listens to.

In 2009, his manager persuaded him to dig out the tape of an incomplete Prefab Sprout album from 1992, called Let’s Change the World with Music. It was basically an extremely elaborate home demo, using virtually all electronically-simulated sounds, which had been presented to the record company with a view to recording it as a full-fledged album. It was passed on at the time for confusing reasons (allegedly including the many references to God and such-like in the lyrics, in songs which evoked the transcendent power of music). The songs held up—indeed many are among the best of McAloon’s career—and it was decided to spruce the demo up with some modern techniques and release it. It got a terrific critical reception, if not much chart action. (And other than the wretched “loudness” of the CD mastering, this writer would have no hesitation rating it as one of the greatest pop albums of the last forty years.)

In the wake of this, but without a conventional record contract, McAloon was offered a deal by a group of investors to record a brand new album. He set about doing it, but apparently got bogged down in a complex project which he was finding impossible to complete to the standard he desired. A call from the investment group late last year lit a fire under him, and he started fresh, grabbing a collection of songs from his voluminous archive (he writes daily) that he felt he could play easily on a guitar and augment with other sounds in his home studio. So, at long last, we have Crimson/Red, labeled as a Prefab Sprout album, but in actuality another very elaborate one man show by Paddy McAloon. 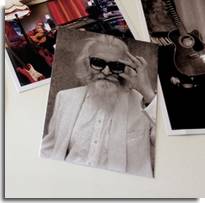 The best tracks on it should make any listener very glad for whatever meandering set of circumstances led to McAloon completing and releasing something. The bouncy melody and wryly-humorous metaphor of “The Old Magician” is all counterpoint for an exquisitely poignant meditation on old age, decay and, yes, death. A mid-song harmonica-break (electronic though it is) provides perhaps the most cathartic few seconds of music on the entire record.

The old magician takes the stage
With sleight of hand he’ll disengage
As dignified as you’ll allow
He’ll take his last, his final bow
He’s lost all his illusions now

“List of Impossible Things” is a song the likes of which only McAloon can write, reminiscent of his classic “Nightingales” in its gentle lyrical plea for wonder at the amazing unlikeliness of all which we (ordinarily) dismiss as ordinary. Musically, on an album where McAloon was deliberately trying to stay simple, this provides the most interesting, memorable and provocative melody.

Crazy the mystic’s song
But what if they’re right all along?
Trust what you cannot know
And pray till your prayers make it so

I also have to say that this track reminds me a bit of “Love and Hard Times,” by Paul Simon from his most recent album, in that it sounds to me like a songwriter stretching the envelope of what he can do. And succeeding as well.

“Billy” is a soaring pop gem, and one which sounds like it must have come to McAloon in a dream; it’s a thrilling, exuberant tune, lifting a paean to music, to love and to musical instruments found lying in the snow. McAloon’s singing has never been more marvelous and beautiful.

“Let your feelings show” is the takeaway from the trumpet-playing protagonist in the song: that’s how you play great music, and maybe how you find real love too.

And the songs that work best on Crimson/Red are the ones with great feeling, because they lead you to forget to question the facsimile instrumental sounds that populate the album. With the relative success of Let’s Change the World with Music, McAloon was likely and rightly emboldened to believe he had everything he needed to make great music within the confines of his home studio, with his computer, his sound modules, his voice, his songs and little else. He could create a sound-scape where “fake” sounds would be acceptable, within the world of a single album. It works swimmingly on Let’s Change the World with Music, but I’d suggest one reason it does is because every song on that album comes from a place of depth and passion. It does not work quite as well, I think, on every song on this new album. What I think of as the lighter numbers—e.g. “The Best Jewel Thief in the World” and “Devil Came A Calling”—are well crafted and clever pop songs, but the records that have here been made of them lack a whole lot in the way of oomph. McAloon has always written light songs, in addition to the more profound ones, and has made fine records of them in other contexts. Take the last “real” Prefab Sprout album, The Gunman. “Farmyard Cat” is a ridiculous piece from out of the clear blue sky, a chamber music hoedown done seemingly for the sheer hell of it. And it works. It’s an invigorating snatch of pure joy. But it has real string players, real viola, violins and cello. Would it have worked if it were just Paddy and synthesized strings? I really don’t think so. Likewise, “Cornfield Ablaze,” from the same album: no masterpiece, by any means, but a good, enjoyable, pounding kind of pop tune, where the real bass, drums and guitars punch out the passion that the song is trying to convey. All electronic, I’m afraid it would’ve just sounded limp.

So I’ve been returning to Crimson/Red again and again for its best tracks, but not so much for others that it seems to me could make fine records if only recorded with real musicians and instruments. That’s not going to happen, of-course, and the last thing I’d want to do is offer even an iota of discouragement to McAloon with regard to further recording; on the contrary, I’d like him to record and release as much as he humanly can. I would merely suggest, based on this album, that the more emotive tunes, the ones that touch those heart-catching mysteries, are the ones which are ultimately going to fare best in the context of electronically-simulated instruments. They better invite the suspension-of-disbelief that brings the listener gladly along.

Crimson / Red is available via Amazon.com, via Amazon UK, and via PrefabSproutAlbum.com and via iTunes.

(A note on sound quality: I purchased the vinyl long-playing record, which sounds very nice. It came with a CD included, which suffers from a degree of loudness—i.e. excessive dynamic range compression—as so many CDs of the past decade or so tragically do. More on that here if you’re interested.)