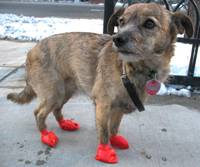 It’s a dog’s life. That expression was originally coined and used to characterize a life of misery (where you might be treated like a dog, get sick as a dog, and die like a dog). In more contemporary times it’s often heard and used in exactly the opposite sense, that of a dog’s life as one of carefree laziness, with every want fulfilled. Since dogs have, in many societies, gone from working beasts thrown scraps to pampered pets who shop at canine boutiques, it’s not hard to understand how the expression has garnered its new meaning.

Still, even for a dog in the pet-loving U.S.A., where I reside, life can turn out to be filled with hazards and prove even more brutally short than the dog’s life is genetically programmed to be. If your owner lives out in the sticks and lets you roam a bit, the risks might include coyotes and other predators, disturbed bees’ nests, and of-course the roads and highways of death. If you are an urban pooch and never leave your leash, your owner will worry about you eating some unspeakable poison off of the street, or getting electrocuted by stray voltage from underground wires. (And most unfortunate dogs must somehow try to survive the truly vile processed dog “food” that that they are compelled to eat from the moment they are weaned from their mothers, but that’s another story and another soapbox).

Another bane of existence for urban dogs comes in the winter time, when snow falls, ice forms, and sidewalks are doused with great quantities of salt or other de-icing chemicals. Compelled to walk through this stuff barefoot, some hardy dogs appear oblivious, while others limp and suffer. Once home, licking the stuff off of the paws can cause gastric problems. A dog’s life indeed.

So, a market has developed for products that can protect your dog from this scourge and make a walk in the wintry city an enjoyable and at least somewhat safer experience again. A variety of footwear designed for dogs has been designed and sold, with predictable results: lots of money spent by dog-owners, but very few satisfied dogs walking around sporting their boots. A dog accustomed to feeling the ground under his feet is not terribly comfortable with his paw encased in a human-like boot. Many dogs, like mine, are likely to kick back like enraged donkeys trying to shake them off. Once outside, in any case, the faster a dog learns to move around in them, the faster they tend to fall off. Now you have to worry about the salt and about losing your expensive poochie-boots all at the same time. That is not exactly success.

One of the newer options that I’ve come across for dog owners, then, is what prompts this review. The product is called PAWZ

, and the first thing to remark about these “boots” is their extremely close resemblance to ordinary rubber party balloons. Effectively, that is what they are, except with shorter and wider necks, and a main body that is probably more elongated than the average party balloon. And, of-course, they are priced far higher than your average balloons.

website claims that these boots will protect against “Ice, Lawn Chemicals, Salt, Liquid Chloride, Snow, Fire Ants, Pool Liner Tears, Mud, Clay, Pad Rashes, Post-Surgical Infection, Post-Grooming Dirt [and] Hot Pavement.” Me and my dog Billie have only tested them in relation to salt and de-icing chemicals. (Why would a dog require protection for its feet from snow, or mud, or clay anyway? Your guess is as good as mine.)

Well, she was cooperative the first time I put them on her feet (with some difficulty on my part) — but then she cooperates, with varying degrees of reluctance, with almost everything to which she is subjected. Once all four “boots” were on, after a few leg shakes, she stood stock still and looked at me. 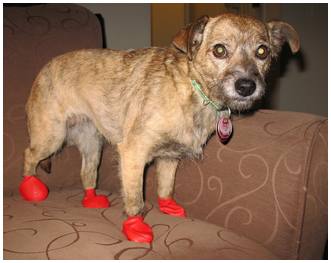 All verbal instructions and gestures from me to entice her to take even one step on her own were ineffective. She merely stood like an extremely realistic exhibit in the Natural History Museum and gazed at me. Throwing a ball will always rouse her to immediate action; in this case the ball bounced and rolled past her again and again, and she remained completely motionless, except for an emotionless glance at the ball and at me. Then, I played the trump card. I got one of her favorite treats and offered it to her from about 10 feet away. I was shocked to my core when she continued to refrain from movement. Not one step. This was unprecedented.

Now, it became a genuinely fascinating challenge to persuade her to take even one voluntary step while wearing the boots. I didn’t want to physically push or pull her to get her to move for the first time. So, I placed a dog biscuit closer to her, on the floor. No go. A little closer. Still no go. Finally, I placed it so close that she would only have to take one step, the tiniest of steps, in order to reach it. Finally, and slowly, she stirred. She took the merest of steps, obtained the biscuit, and then stood stock still again. So, I placed another small piece of a biscuit similarly close by, and she took another step. And so on, till she had finally walked several steps on her own, along with a little more shaking of her back legs, trying to get rid of her rubber oppressors.

Billie was not to become any more at ease with the boots indoors, but, once outside on the sidewalk, she quickly became completely comfortable. 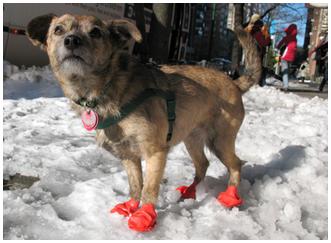 Clearly, being able to feel the pavement beneath her feet pleased her, versus previous kinds of footwear she had worn. In fact, even while on the leash, she would engage in bursts of running, seemingly delighted with herself. This continues to be her behavior while wearing these boots. Perhaps she likes not feeling the cold and wet snow against her feet. Whatever it is, she is more inclined to run than ever while wearing these things. And this brings up one of the main caveats regarding this product: While the manufacturer claims that they will not fall off, they most assuredly can and will, in our experience. The faster Billie runs, the more likely that one or other of the boots will eventually come off. Certain of them I’ve found to be sized irregularly. The ones with slightly wider necks have a greater tendency to fall off, naturally enough. This would be less of a big deal, perhaps, were they a good deal cheaper to buy. At the price we’ve paid for them locally (almost $20 for three sets of four, i.e. a dozen), losing one is not a negligible event. The bright red color of the ones Billie wears, while ridiculous and no doubt a cause for mockery from other dogs, at least helps with locating them in the snow.

Do they protect from salt and de-icing chemicals? 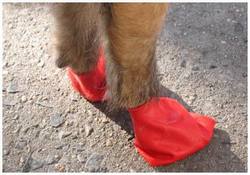 Yes, so far they have done that very effectively. They are also quite easily washable, although afterwards the internal rubber surfaces stick to each other which makes putting them on a greater challenge. So far, they have held up well to repeated uses. (You will likely have greater trouble putting them on, and also perhaps experience more holes developing in them, if your dog’s claws are particularly long, naturally enough.)

So, overall, we are glad that we have them. They serve their purpose on those days immediately after a snowstorm when the rock salt and de-icing chemicals are everywhere and unavoidable. On the other hand, since they take a while to put on and do occasionally fall off, we elect not to use them on days when we can better pick our way around salty areas.

I would probably rate them higher if they were more reasonable in price, and therefore more genuinely “disposable,” as they are described by the manufacturer. Amazon mentions a list price (at the time of writing) of $30 for a set of 12, which is pretty outlandish. In actuality (and again at the time of writing) they are being sold there for around $10, which at least is a lot cheaper than we found them in the local doggy boutique.

Perhaps one day there will be a more perfect and less pricey solution to protecting your pooch’s feet from the burning salt, and similar hazards. In the meantime, if this is an issue for you and your Fido, then PAWZ

(If you enjoyed the photos, you can also watch the video on YouTube: PAWZ boots for dogs, as modeled by my mixed terrier Billie.)

See our new section dedicated to stories of animal interest: DOGS, BY & LARGE.