After performing a series of recently-developed tests, doctors and scientists report that an 84-year-old man, presumed to be in a vegetative state since 2006, showed “significant” brain activity when shown family pictures and offered other stimuli. A statement from Ben Gurion University in Israel, whose scientists participated in the tests, is quoted here:

“[The patient], presumed to be in a vegetative state since 2006 due to brain haemorrhage, was scanned to assess the extent and quality of his brain processing using methods recently developed by Professor Monti and collaborators,” it said.

“Scientists showed [the patient] pictures of his family, made him listen to his son’s voice, and used tactile stimulation to assess to what extent his brain responded to external stimuli,” it said in a statement.

“To their surprise, significant brain activity was observed in each test in specific brain regions, indicating appropriate processing of these (stimuli).”

Although this sounds dramatic—and rightly so—it is not unprecedented. A study published in the New England Journal of Medicine in 2010 (and noted then in this space) found similar results in a number of patients who were also diagnosed as “vegetative.” 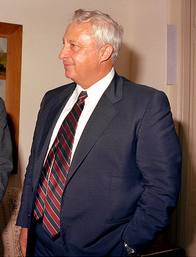 Why then are the results for this particular patient in the news today? It is because the patient’s name is Ariel Sharon, and he is a former prime minister of Israel. In 2010, several years after his medical crisis, a hospital manager involved with the care of Sharon was quoted as saying that “The part of the brain that keeps his body functioning, his vital organs, is intact, but beyond that there is nothing, just fluid.”

Yet, although he remains incapable of speaking or of making substantial communicative gestures, the results of these tests will make his family feel vindicated in believing that Ariel Sharon is in fact still “there,” despite what various medical professionals have maintained, and despite the voices of all those who have advocated disconnecting the feeding tube and “allowing” him to die (of starvation). Will he ever recover something like normal consciousness and the ability to communicate? No one can say.

We are not all like Ariel Sharon, a former general and prime-minister of Israel, receiving this level of attention. But the general implications of this and similar cases should be clear enough. Questions of human life and human consciousness remain mysterious. And doctors do not truly know the final answers, even when they are stating them with confidence.