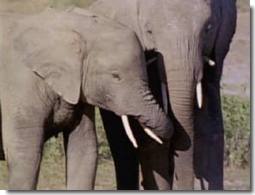 I love elephants. I would like to have an elephant as a pet, and, as there is no specific rule against elephants in my apartment building, I figure this is quite feasible, once I locate one.

Recently there was a news story about a scientific study in Zimbabwe which demonstrated that elephants, unlike most animals, immediately understand the purpose of human pointing. That is, their attention will be directed to the place that a human trainer points to with his or her arm and hand, even in advance of any training for this purpose. This was considered a real discovery, and perhaps it is, but on consideration it doesn’t seem too surprising that an elephant would see a human arm kind of like it sees the outstretched trunks of fellow elephants, and would pay attention to it.

I’ve never met an elephant, but my own affection for them seems to date back to when I was about ten or eleven years old, when I read a book titled “White Gold,” a kind of history of the African ivory trade. I was reading anything that came within my arms reach at that age, and it was just another book I got out of the library. But it left an impression upon me. I especially remember the writing within this book on the intelligence of elephants. The writer went into some detail on the sophistication of an elephant’s trunk, on how many quite fine motor tasks an elephant can perform with this remarkable appendage. A relationship was theorized between the brain strength required to power such a complex organ or limb and the general intellectual capacity of the elephant.

I found some recent research on the subject, and some numbers: “With precisely timed contractions of roughly 150,000 muscle fibers, an elephant’s trunk can perform tasks as delicate as picking up a single peanut and as powerful as transporting a tree trunk.” Further:

Some of the finest movements occur in the elephant’s finger-like trunk tip, which can grasp and manipulate small objects. For example, a feeding elephant will wrap that finger around a tuft of grass and pull it from the ground. It can then cradle the grass in the trunk’s middle while uprooting more with the trunk’s end. Once the animal has collected enough roughage, it straightens its trunk to let the grass slide down to the finger. The finger then pinches the entire bunch and places it into the animal’s mouth.

Can you imagine doing all of that with your nose? But never mind your nose (and the less said about it the better, frankly): Could you even do all of that using your arm and your hand with its five fingers including the opposable thumb? For my part, I believe I would need to use both of my arms. In fact, forget about pulling tufts of grass and storing them while pulling more; I need to use both arms these days when pouring a jigger of gin. An elephant could do that with its trunk while simultaneously changing the channel on the TV and throwing some popcorn in the microwave. That study I referred to was finding evidence that a single elephant’s trunk actually has a right and a left side as far as its brain is concerned. It is that complex. Elephants can even use their trunks to speak Korean. It has been documented.

And beyond the mere cleverness or fine-motor sophistication of elephants is their remarkable emotional capacity. There are endless stories on the closeness and complexity of their social attachments, and the ways in which elephants have been seen to mourn their dead. It has to make one stop and think, even more perhaps than seeing such qualities in animals that live close to us, like dogs, or animals that appear to resemble us, like apes.

There is no big conclusion to all of this. It is just a further cause for wonder, both at the amazing capacities of elephants, and the endlessly awe-inspiring nature of this world that we occupy for such a short time. By all means we should be kind to our local elephant. Including the one who might move into your apartment building.

And if you also love elephants as well as dogs, get your handkerchief out for the video below.