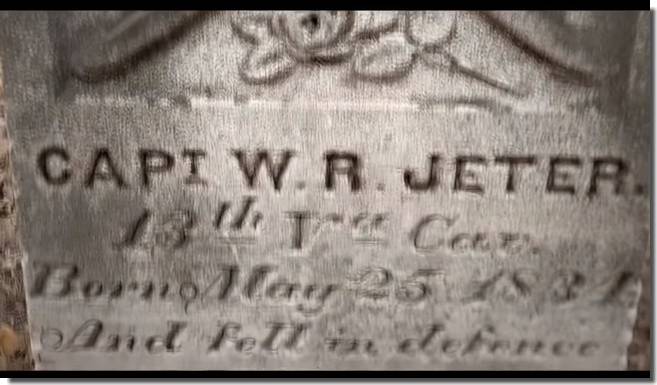 The title of this post does not refer to the talented Yankee baseball player who is also his team’s captain, but to the name which is on the tombstone of the grave which Bob Dylan visits in the video for ‘Cross The Green Mountain.

A photograph of the grave can be seen at findagrave.com.

Note: the website mistakenly says “fell in defense of his county;” I think that looking at the photograph closely confirms that the word is indeed “country,” of-course.

In the video, Dylan rides into the cemetery on horseback and places a framed photo or daguerreotype on the grave.

I have no speculation as to why Capt. Jeter’s grave was chosen, but naturally it does arouse curiousity as to any story surrounding this particular Confederate soldier. I don’t know if there are any Civil War buffs out there who might know anything about him. The power of Google, however, has given me this so far:

In 1903, a book was published called “A Virginia Girl In The Civil War 1861 – 1865,” self-described as “Being a record of the actual experiences of the wife of a Confederate officer. Collected and edited by Myrta Lockett Avary.” The complete text of the book is hosted on the web by the University of North Carolina at this link.

As described in the introduction, the book is basically the oral reminiscences of a then-elderly woman as provided to Ms. Avary, who edited and arranged the stories for publication. The woman was married to a Confederate officer, as the subtitle states, and herself spent time nursing the wounded in hospital wards.

I came across the text via Google because one of the woman’s friends is married to a Captain Jeter, who ultimately is mortally wounded and is tended to in his last hours by the storyteller herself.

If you read sufficiently through the text, you will discover that the storyteller’s husband is in the 13th Virginia Cavalry (the one named on Capt. W.R. Jeter’s grave stone). It seems at least highly likely that the Captain Jeter mentioned in this story is also in the same cavalry, because when he is wounded, the storyteller’s husband sends word to her to go to the hospital and tend to him.

But now a caveat; the book’s introduction also states:

Out of deference to the wishes of living persons, her own [i.e. the narrator’s] and her husband’s real names have been suppressed and others substituted; in the case of a few of their close personal friends, and of some whose names would not be of special historical value, the same plan has been followed.

So, we don’t know for sure if we can rely on the name “Jeter” after all. Was this one of the close personal friends whose name was changed? I can’t say.

Nevertheless, given the other circumstances which jibe with the information on the grave marker, it seems to me that there’s a better than even chance that this is the actual Captain Jeter of the 13th Virginia Cavalry whose grave Dylan visits in the video for ‘Cross The Green Mountain.

So, here is an extract of the text of this book, where the narrator learns of Captain Jeter’s wound, goes to tend to him, and later talks with his mother and his widow.

And now began for me the nursing in hospital wards that made up so large a part of our lives during the war.

“Jeter shot, perhaps fatally. Go to the hospital and see what you can do for him. I have telegraphed to his wife and mother. “DAN.”

The orderly who brought me this message from my husband said that Captain Jeter’s command had been in a skirmish that day, and that the captain had fallen, mortally wounded, it was thought.

I went to him at once. He was lying unconscious across the bed as if he had fallen or been dropped there, dressed in full uniform with his coat buttoned up to his throat, breathing stertorously, and moaning. There was a small black hole in his temple. I thought he must be uncomfortable with his clothes on, and proposed to the nurse that we should try to undress him, but she said he was dying and it would only disturb him. All that day and until late that night I stayed with him, changing the towels on his head, wiping the ooze from his lips, listening to that agonizing moaning, and thinking of the wife and mother who could not reach him. About ten o’clock he seemed to be strangling.

“It’s phlegm in his throat,” the nurse said. She ran her finger down his throat, pulling out a quid of tobacco that had been in his mouth when he was shot and that had lain there ever since.

He died at midnight, and his mother came the next day at noon. I don’t know which was the hardest to stand, her first burst of agony or her endless questions when she could talk.

“Did he suffer much, Nell?”

“Not much, I think. He was unconscious from the time he was shot.”

“Nell, did he send me any message? Did he call for me?”

“He was unconscious,” I repeated gently, “and we must be thankful that he was. If he had been conscious he would have suffered more.”

“Yes, yes; I reckon I am thankful. I don’t know how I am now. But I’m trying to submit myself to the will of the Lord. Nellie, you don’t know what a sweet baby he was! the prettiest little fellow! as soon as he could walk, he was always toddling after me and pulling at my skirts.”

I turned my head away.

“Last night I dozed for a minute and I dreamed about him. He was my baby again, and I had him safe in my arms, and there never had been any war. But I didn’t sleep much. I couldn’t come as soon as I got the telegram. I had to wait for a train. And I was up nearly all night cooking things to bring him.”

She opened her basket and satchel and showed me. They were full of little cakes and crackers, wine jellies and blanc-mange, and other delicacies for the sick.

“Do you think if I had gotten here in time he could have eaten them?” she asked wistfully.

“He could not eat anything,” I sail choking back my tears.

“You don’t think he was hungry at all Nell? The soldiers have so little to eat some times – and I have heard it said that people are sometimes hungry when they are dying.”

“Dear Mrs. Jeter, he looked well and strong except for the wound. You know the troops had just returned from the valley where they had plenty to eat.”

“I am glad of that. I was just getting a box ready to send him full of everything I thought he would like. And I had some clothes for him. I began making the clothes as soon as I heard the troops had come back to Culpeper. You say he was wounded in the head?”

Neither of us closed our eyes that night. She walked the floor asking the same questions over and over again, and I got so I answered yes or no just as I saw she wanted yes or no and without regard to the truth.

Several months after this I saw Captain Jeter’s widow. She was surrounded by his little children – none of them old enough to realize their loss.

“Nell,” she said, “you remember the day in Petersburg when we stood together and watched the troops start off for Norfolk – and everybody was cheering?”

“Well, war does not look to me now as it did then. God grant it may spare your husband to you, Nell!”

I called on another widowed friend. Her husband – a captain, too – had been sent home, his face mutilated past recognition by the shell that killed him. Her little ones were around her, and the captain’s sword was hanging on the wall. When I spoke to her of it as a proud possession, her eyes filled. His little boy said with flashing eyes:

“H-sh!” his mother put her hand over his mouth. “God grant there may be no war when you are a man!” she said fervently.

“Oh, Nell,” she said, “when it’s all over, what good will it do? It will just show that one side could fight better than the other, or had more money and men than the other. It won’t show that anybody’s right. You can’t know how it is until it hits you, Nell I’m proud of him, and proud of his sword; I wouldn’t have had him out of it all. I wouldn’t have had him a coward. But oh, Nell, I feel that war is wrong! I’m sorry for every Northern woman who has a circle like this around her, and a sword like that hanging on her wall.”

The little boy put his arm around her neck. “Mamma,” he said, “are you sorry for the Yankees?”

“My dear,” she said, “I am sorry for all little boys who haven’t got a papa, and I’m sorry for their mammas. And I don’t want you ever to kill anybody.”

NOTE: This work is the property of the University of North Carolina at Chapel Hill. It may be used freely by individuals for research, teaching and personal use as long as this statement of availability is included in the text. (Click here to go to the UNC website and access the complete text.)

So, there you have it. Captain Jeter is just one of some 500,000 soldiers who died during the U.S. Civil War.